Todd the hard charger for Jack Daniel's Racing in Perth 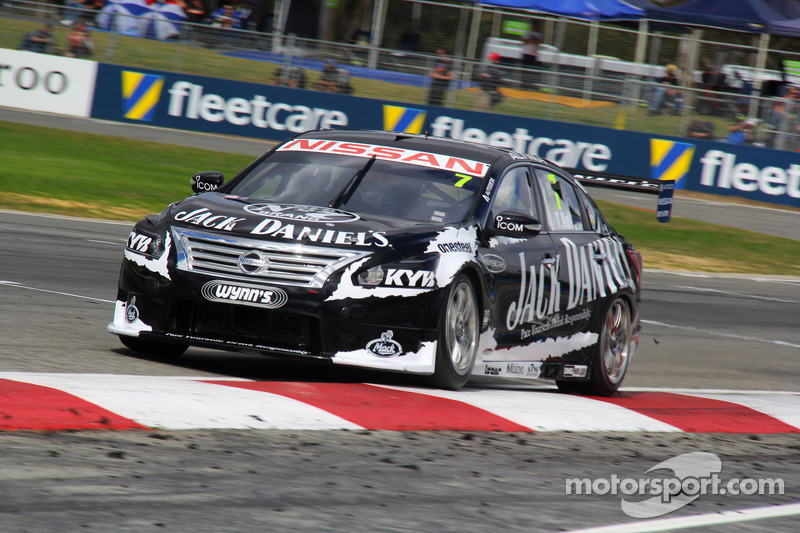 Todd Kelly proved to be a hard charger today at Barbagallo Raceway for the Perth 400, with the Jack Daniel's Racing Nissan Altima driver improving a combined total of 19 places in the twin 100km races.

With tyre strategy and conservation coming to the fore on the abrasive circuit, pitting late in the opening race paid dividends for Todd, which saw him improve from 18th at the start to eighth after 42 circuits.

In the later race Todd once again picked off places, this time after pitting early, which resulted in a 16th place finish.

Rick Kelly meanwhile battled car setup throughout both encounters, with the younger brother only able to produce results of 19th and 22nd.

The weekend of racing culminates tomorrow with a 20 minute qualifying session ahead of a final 200km long race.


"The first race was alright, being only a few spots up the grid makes all of the difference," said Todd Kelly.

"Starting dead last in that second race, you just have to take a little bit too much out of the tyres to try and move forward early.

"I was struggling there at the end of each stint, but it was the best I could do.

"If we were a little bit further up to start with, and not off the back row, we would have climbed up further.

"Tomorrow we need to make sure we nail qualifying, it's a lot longer race, and the car looks after its tyres pretty good, so if we can qualify OK, it might not be too bad a day."


"We knew that looking after your tyres around here is the key to a strong result, certainly Todd and the car 7 crew really showed that in the first race today," said Rick Kelly.

"They played a good tyre strategy in qualifying and in the race to come through to eighth.

"In between races we tried to chase the setup, and unfortunately we wound up in no man's land so to speak, and it really showed with our pace in that last race, and we just didn't have it.

"We tried to stay out of trouble and just stay up as high as possible; unfortunately we couldn't get an ideal finish.

"We can learn from that and try and do something better tomorrow for the longer race.

"Thankfully we have the data from Todd, and if we follow that lead it will help us tomorrow."

Tough day at the office for Bright at the Perth 400