Tim Blanchard will substitute for the injured Todd Kelly

Jack Daniel's Racing announced today that Tim Blanchard would substitute for the injured Todd Kelly at the next three rounds of the 2012 V8 Supercar Championship, starting with the Armor All Gold Coast 600 on October 21st.

Kelly hurt his shoulder at a training camp prior to the Dick Smith Sandown 500 and after driving at Sandown he visited Dr Carl Le, the V8 Supercars medical officer.

I know he will do a great job for us.

He was then assessed by Dr. Shane Barwood, a leading shoulder specialist and surgeon, who recommended surgery, following the Supercheap Auto Bathurst 1,000.

Kelly successfully underwent surgery in Melbourne on his 33rd birthday, Tuesday October 9th and will now commence rehabilitation, ensuring he is fit and ready to debut the all-new Nissan Altima, at the Clipsal 500 in March 2013.

Blanchard is very familiar with the car and team having been Kelly’s co-driver at Sandown and Bathurst this year.

Todd Kelly – “I’m a bit sore at the moment which is to be expected and pleased with the result of the surgery. I can’t wait to get back behind the wheel once I get the green light from Dr. Barwood. Tim will take over the #7 Jack Daniel's Racing car and I know he will do a great job for us and will help get Marco Andretti up to speed at the Gold Coast race”. 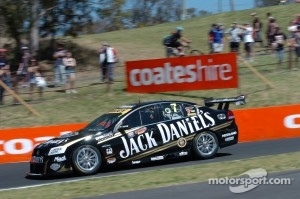 Tim Blanchard – “I’m really looking forward to driving for Jack Daniel's Racing once again and appreciate the opportunity that Todd and Rick have given me. I can’t wait to join Marco at Queensland Raceway for the test day and then share the driver’s seat with him at the Gold Coast”.