The Bend Supercars: McLaughlin one point from title

Scott McLaughlin only needs to outscore Jamie Whincup by a single point this afternoon to seal the 2020 Supercars title, after a dominant win in the second heat at The Bend. 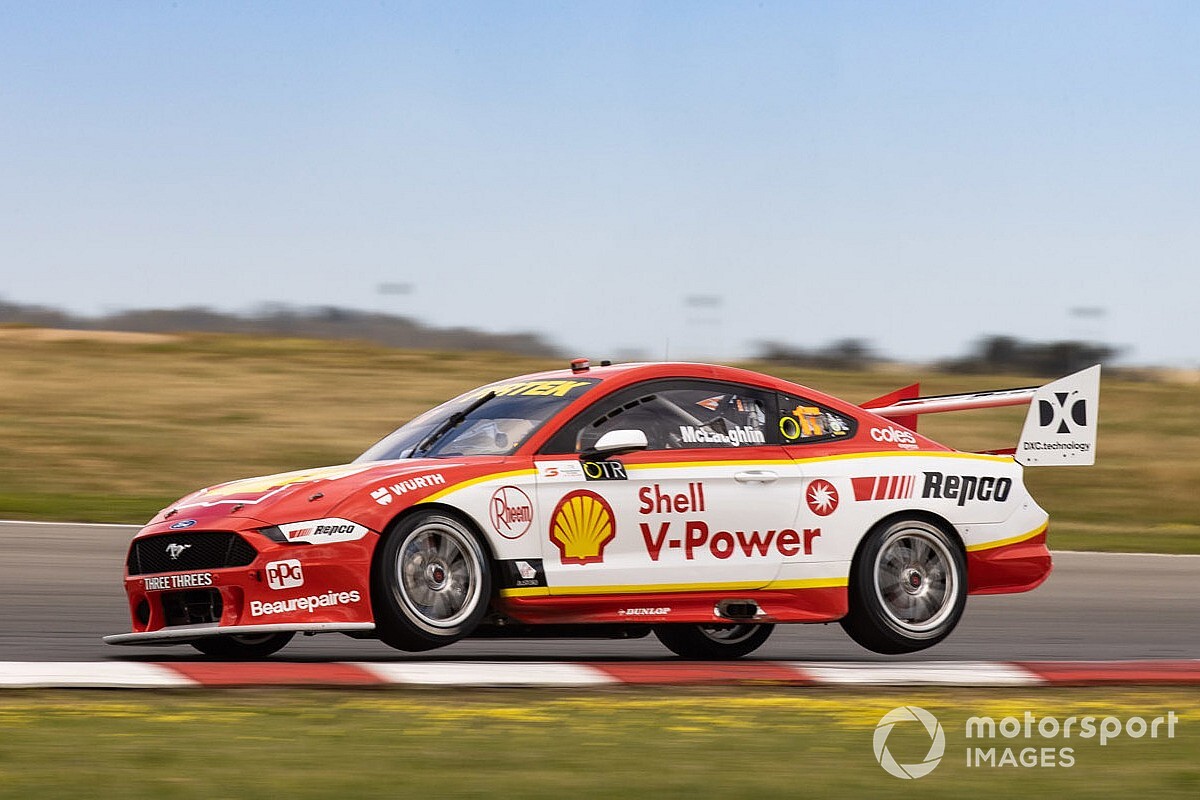 McLaughlin was beaten off the line by teammate Fabian Coulthard at the start of the 32-lapper, the pole-sitter even needing to defend into Turn 1 to keep Whincup at bay.

However, once the early challenge from Whincup was contained, the two Penske Fords executed an inevitable switch, Coulthard rolling out of the throttle on Lap 7 to gift the lead to McLaughlin.

From there it looked like a cakewalk for the points leader, who took his mandatory service on Lap 12 and faced an easy run home with Coulthard in the rear gunner role.

That was until Lap 22, when both Coulthard and David Reynolds rolled to a stop with their own driveline problems, not only costing McLaughlin the protection of his teammate, but also his margin thanks to the deployment of the safety car.

The six-lap dash home proved simple enough, however, McLaughlin comfortably able to hold off Anton De Pasquale and Cam Waters to take a 56th career victory, which moves him clear into fourth on the all-time winners list.

Even better for McLaughlin was that Whincup slumped to seventh in the race thanks to a pitstop issue, which means he only needs to outscore the T8 driver by one point in this afternoon's finale to seal the title with a round to go.

"It's a bummer about Fabs, we were on for a one-two there," said McLaughlin.

"Huge team game by Shell V-Power Racing, Fabs took it on the chin to let me go at the start. I really appreciate that. He had a great car and a great start.

"We'll make sure we dot our i's and cross out t's. If we can get it done today, that'd be fantastic. If we don't, we'll put ourselves in the best position come Bathurst."

Having run third in the first stint, Whincup was delayed at his stop when he ran over an air hose on his way into the box. That meant his service took 6.6s, Whincup re-emerging down in sixth.

The safety car didn't go his way, either, teammate Shane van Gisbergen opting to stop for four tyres for a charge to the flag. That meant he was able to chase Whincup down, Triple Eight giving the Kiwi the green light to pass the #88 entry, despite it robbing Whincup of points.

Van Gisbergen managed to climb all the way to fifth, passing Rick Kelly, Whincup, Chaz Mostert and Nick Percat in the last six laps. He managed to get onto the back of fourth-placed James Courtney, too, but the veteran was too solid in his defence on the final lap.