After a six-week break, the battle for the Dunlop Series resumed at Winton Raceway today.

Coates Hire Racing’s Nick Percat, who won both races at the previous round at Bathurst, has continued his scintillating form at the rural Victorian track, setting the quickest time in the final practice session of the day. 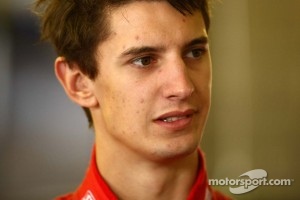 Tomorrow, the Dunlop Series cars will qualify for this penultimate round of the series. With 300 points available this weekend and just 128 separating Percat, Pye, McLaughlin and Mostert the intense title battle is set to continue.

Nick Percat was pleased with his performance today and said: “It’s been a great day for the Coates Hire team. We ran a set of new tyres late in the session, like most of the others.

To do that time on the track in that condition is very positive for us and we have a good base for us to work with for the rest of the weekend. Hopefully we will have another cracking weekend like at Bathurst”.