Ready, set, action for the opening race of the V8 Supercars Clipsal 500 in Adelaide, Australia on and off the circuit.

The Clipsal 500 consists of two races around a 3.2 kilometre track, commonly referred to as the “concrete jungle”. Average speed is 130 kph with a maximum speed of 250 kph along the front Adelaide Straight.

The Clipsal 500 is the first race of the V8 Supercar Championship and has been judged as the motorsport event of the year on no less than 8 occasions. V8 Supercars commenced using the circuit in 1999 following the Formula 1being lost from the calendar and as a result was reduce from 3.78 kilometres.

V8 Supercars not only moved into the future with their race cars but have also kept pace with mobile technology via the introduction of the V8 Supercar 2013 app which not only provides 3D mapping, race programs and results, driver bios, Twitter and Facebook feeds but much more. 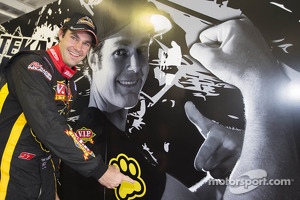 Not only will the Adelaide circuit rock as the V8 Supercars weave their way around the concrete jungle this weekend, there will be some back to the future entertainment in the way of heavy metal rockers Kiss and Motley Crew. Gene Simmons and the band will be playing tracks from their new Monster album.

The Ford Performance Racing stable has added a forth car to be piloted by Alex Davison, sponsored by Jeld-Wen who make a return to the championship having previously sponsored Marcos Ambrose. Davison partners brother Will who is behind the wheel of the Pepsi Max Crew Ford.

Tekno Autosports Jonathon Webb has added a plus to his team with Shane Van Gisbergen coming aboard. Webb and “Giz” have always demonstrated that they have what it takes to be at the pointy end of the season and with their engines coming from Triple 888 Racing this is a distinct possibility. Van Gisbergen starts on the front row of the grid for today’s race whilst Webb will take off from 6th.

This year appears to be the final for Russell Ingall. ‘The Enforcer’ is 49 years old and it has been a long time between race wins. Although he won the championship back in 2005 in a Ford, he has since returned to Holden where he recalls his glory days with Larry Perkins in 1995 when they won Bathurst and is hoping to spray the champagne before the season is out. 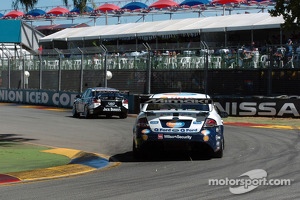 Dick Johnson Racing is synonymous with Australian Motor Racing, and has been for the past 35 years. Although the team took the title in 2010 with James Courtney before he defected to the Holden Racing Team this year sees the team without a Johnson behind the wheel. Young gun Tim Blanchard will drive the famous number 17 with Jonny Reid piloting the 12 sister car. Blanchard has co-driven a number of endurance races and last year got his chance to impress after replacing Todd Kelly in the Jack Daniels Commodore after he underwent surgery.

Garry Rogers celebrates his 50 years in Australian Motorsport this year and was no doubt smiling after having both his drivers, Frenchman Alexandre Premat and Scott McLaughlin starting 8th and 10th respectively in the first race of the season. Premat is in his second year whilst McLaughlin, last year’s Development Series winner takes on his first full time drive in the main game.

SVG in the spotlight again with Clipsal 500 pole