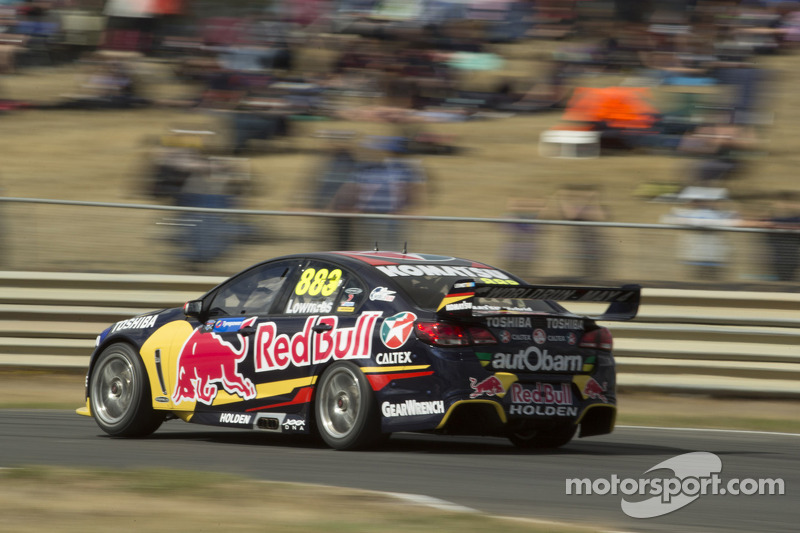 Race is next weekend at Hidden Valley

1. Impressively, 10 different drivers have claimed victories in the first 16 races of this year's V8 Supercars Championship.

Seven different teams have won races while four of the five manufacturers on the grid have collected victories. Nissan is the only one yet to claim victory or a podium finish.

Red Bull Racing Australia has won more races than any other team this year - six - though has collected just one win from the last 10 races.

The average age of the grid at Hidden Valley is 31.2.

Lowndes has won six races in Darwin - including the last race on the Sunday last year - though has not taken a pole in the 'Top End' since 2000.

He sits second in the championship and 101 points behind leader Mark Winterbottom heading to Hidden Valley.

3. The SKYCITY Triple Crown award still remains unclaimed given no driver in the event's history has been able to win all three races and clean sweep a Hidden Valley weekend.

From 2009 to 2012 - when there were two races per Darwin event rather than three - the Triple Crown was decided on the basis of a driver qualifying fastest in the Top 10 Shootout and winning both races. No driver was able to achieve this in those years.

4. Championship leader Mark Winterbottom has one of the strongest records at Hidden Valley of the current V8 Supercars Championship field.

The Pepsi Max Ford driver has qualified in the top five for 11 of the last 12 races in Darwin and finished on the podium nine times in his last 12 race starts.

His Ford Performance Racing squad should also feel confident given their pilots have had the top point scoring driver at the last three events (Winterbottom at Winton and Pukekohe and Chaz Mostert at Barbagallo).

5. Only three drivers, Russell Ingall, Craig Lowndes and Garth Tander, have competed in each and every V8 Supercars Championship event at Hidden Valley since the first back in 1998.

However, only Tander has started every one of the 44 races the circuit has hosted given Lowndes and Ingall have both failed to start two races each due to various mechanical and electrical problems.

Tander has an incredibly consistent record in Darwin and has not failed to finish a Hidden Valley race since 2001 - a streak of 34 consecutive race finishes.

6. Scott McLaughlin and Jamie Whincup jointly lead the race for the ARMOR ALL Pole Position Award with four pole positions each so far this season.

The Volvo pilot - who celebrated his 21st birthday recently - and the Red Bull Holden driver have both also qualified on the front row seven times each.

McLaughlin, however, has qualified in the top five (13) and top 10 (15) more times than any other driver this year.

Seven different drivers have claimed ARMOR ALL Pole Positions so far this year from 16 races.

7. The SKYCITY Triple Crown will feature the first mixed tyre format of the 2014 V8 Supercars Championship.

Each car will have 12 hard and eight soft Dunlop tyres to use, though the soft tyres will only be permitted to be used on Sunday. Whether teams also choose to spend some time running on hard tyres on Sunday is their decision.

8. Jack Daniel's Racing's Todd Kelly will start his 193rd ATCC/V8 Supercars Championship event at Hidden Valley, moving him past Steven Johnson and Tony Longhurst for 11th on the all-time list.

His brother Rick will start his 173rd ATCC/V8SC event, moving past Jason Bargwanna to claim 15th on the all-time list.

Both brothers have won in Darwin before with Todd claiming overall victory in 2004 and 2005 and Rick winning a race in 2004 and then again in 2011.

9. Ford drivers have dominated qualifying in Darwin in recent years, claiming eight of the last nine pole positions at Hidden Valley from 2010 onwards.

The only Holden driver to claim pole position in that time is James Courtney (Sunday Race 1 last year) for the Holden Racing Team.

While the Swedish Volvo driver is completely new to the Darwin circuit, Percat has a successful history there in the junior categories and is actually undefeated in three previous visits.

He won all four Aussie Racing Car races in 2006 and clean swept all three races in both 2008 and 2009 in the Australian Formula Ford Championship.