Since testing at Sandown in February Jason Bright says Team BOC has made important improvements that, he believes, will see them in the top six this weekend. 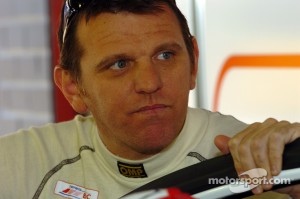 Bright and endurance co-driver Andrew Jones were both in the top five for most of their respective practice sessions today but opted to save tyres rather than go for a fast lap at the end.

The team is therefore 21st on the time sheets, something Bright says they will put right in tomorrow's qualifying at 11.40.

Jason Bright Team BOC "I think we were second-fastest for most of the last session and I didn't do my quickest sectors on my best lap. We dropped back at the end of that session but we didn't put a second set of tyres on and I imagine a lot of the people that popped up at the end there did.

"We've seen a lot of improvements since the test here at the beginning of the year. It was a real struggle for us then but several things have improved since the test, like horsepower and the chassis, and I expect we'll be able to run inside the top six this weekend."

Andrew Jones Team BOC Co-Driver "The effort the guys have put in to blaze a trail has made a real difference I think. The engine speed feels really good and the car's handling well.

"I felt like we were very competitive in the co-driver session. We were in the top five for the first part but, with the red flag, the session came to a stop. We came back out and ran another set of tyres but we were the first to get the chequered flag and we'd only done one run on the tyres. Most people went better on their second run and we were actually P3 on the first sector of the in-lap, so I think that's where we are. It would have been nice to actually finish there rather than have to second-guess it though!"