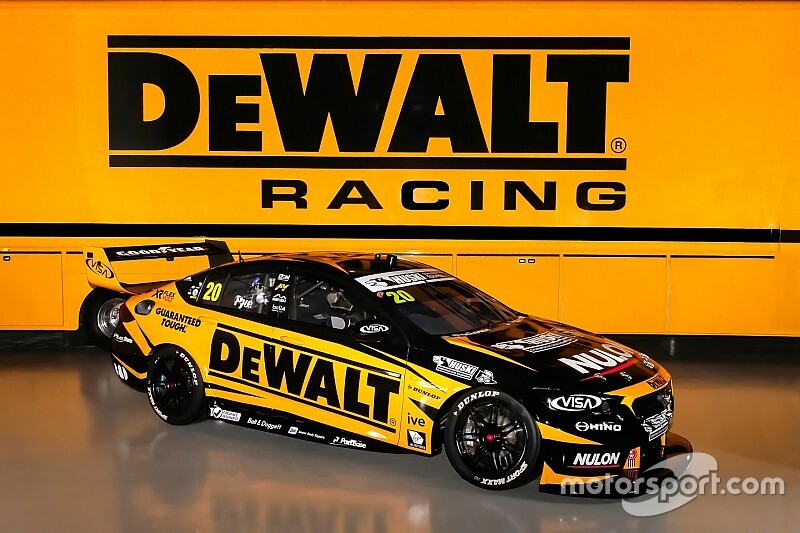 Team 18 has signed leading toolmaker DeWalt as the naming rights partner for Scott Pye’s entry in the 2020 Supercars season.

DeWalt, the flagship brand of Stanley Black and Decker, has widespread presence in motorsport through its sponsorship efforts in MotoGP and NASCAR, but 2020 marks its first entry into Supercars.

Pye’s Triple Eight-built Holden ZB Commodore will carry the familiar black and yellow colours of DeWalt for what will be the 30-year-old's first season with Team 18.

The 30-year-old raced for Walkinshaw Andretti United between 2017-19, scoring a race win at Albert Park, before his move to partner Mark Winterbottom at an expanded two-car T18 squad this season.

“I am really excited to be joining Team 18 and it is an incredible opportunity to represent a global brand with DeWalt,” Pye said.

“A new team, a new number in 20 on the door, a new sponsor, and a new challenge. I’m really excited to be teaming up with a new teammate in Frosty as well, so I’m really pumped to see what we can achieve at Team 18 this season in the Supercars championship.

“From the moment I started chatting with [team owner] Charlie Schwerkolt about what I was looking at doing in 2020, the decision for me became really clear when he mentioned that DeWalt was going to be the naming rights partner on the car. To represent the largest power tool company in the world is surreal.

“The car looks fantastic and the activations they’re going to have at the circuit are going to be second to none, and it reflects their investment in the sport, in this team and in myself.

“We have some pretty exciting times ahead and I’m super excited to be in this car this year with a proper package and working with a team that’s really motivated and extremely talented.”

All the latest from the Supercars launch season:

Team 18's deal with DeWalt marks the extension of its arrangement with Stanley Black and Decker, whose brand Irwin joined the team to back Winterbottom's #18 entry last season.

Irwin will remain as the naming rights partner for Winterbottom's Holden in 2020.

“It is a dream for me to have a two-car team with such high calibre partners like Irwin and DeWalt, and to bring Scott Pye on as the driver alongside Mark Winterbottom is a real coup for everyone at Team 18,” said Schwerkolt.

“I am thrilled to have Stanley Black and Decker supporting both cars in the team. It goes back five years ago when we started with one of their other brands in Sidchrome, and they have continually increased their investment and support to Irwin and now DeWalt.

“DeWalt is the largest power tool company in the world, their range is incredible from saws, to drills to radios and it is all cordless lithium battery technology. We are so proud to have them, it’s powerful, it’s tough, and it is the brand to have.”

“Scott Pye is a fantastic addition to Team 18, he’s going to make a great team mate to Frosty. We’ve seen how well he can drive in the last few years and he’s on the way up for sure, it’s exciting to have him onboard.”

Pye will be supported by Matthew Saunders as race engineer and Rory Jackermis as Data Engineer.

The technical team will continue to be led by Phil Keed.