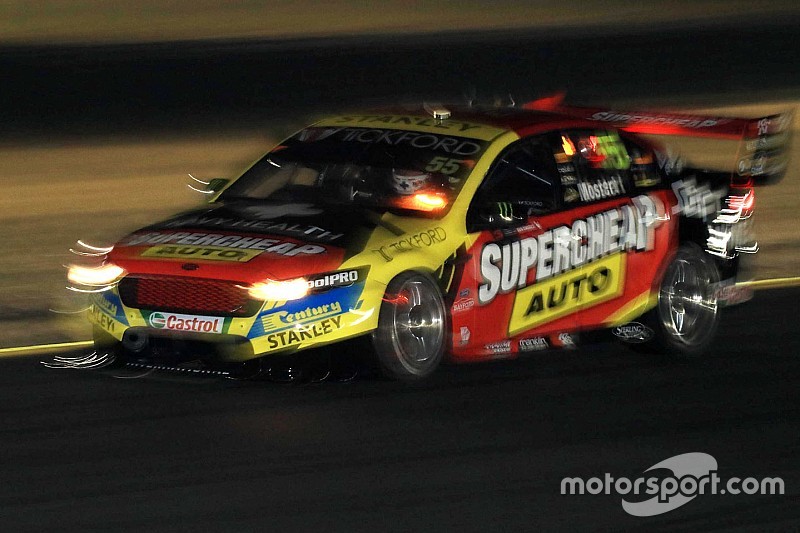 Chaz Mostert topped a crucial single night time Supercars practice session at Sydney Motorsport Park, while Craig Lowndes and Fabian Coulthard will both need to improve in tomorrow's practice if they're to avoid Q1.

The 40-minute session marked a return to Supercars night racing in over two decades, Tickford driver Mostert on or near the pace from start to finish.

He first took over from Shane van Gisbergen on top of the times before the midway point of the session with a 1m29.315s, that time unbeaten until there was just seven minutes to go.

Scott Pye then enjoyed a brief spell as the pacesetter with a 1m29.059s, before Mostert reclaimed top spot with a 1m28.854s right at the death.

""We're probably one of the only cars to run tyres, so we popped up there at the end, but it felt okay on the used tyres, it was fairly comfortable," said Mostert.

"It felt really quick out there, probably the fastest a Supercar has ever felt for me, flashing in and out of the light."

Pye ended up second, while Mark Winterbottom made late gains to slot into third. Rick Kelly was another late improver with the fourth quickest time, with Scott McLaughlin dropping back to fifth.

"That is wild. It's the coolest thing I've ever done," said McLaughlin.

"Down the chute, you go into 1 and the first couple of laps I missed all my markers and was caught out by it all.

"I got held up really badly in the second sector, there's still a fair bit to play with, but finding those marks… it feels like you're doing 400 clicks, it's crazy."

Nick Percat was sixth quickest, one spot clear of Jamie Whincup. The reigning champion left it late to grab his provisional automatic Q2 spot, going from the back end of the field to sixth on his final run.

James Courtney was eighth, van Gisbergen slipping back to ninth, and David Reynolds the lucky last to put a Top 10 spot in the bank overnight.

There are a couple of big names that will have to improve during the day time practice tomorrow to avoid Q1, such as Lowndes, who was just 12th quickest, and Coulthard who was way back in 19th.