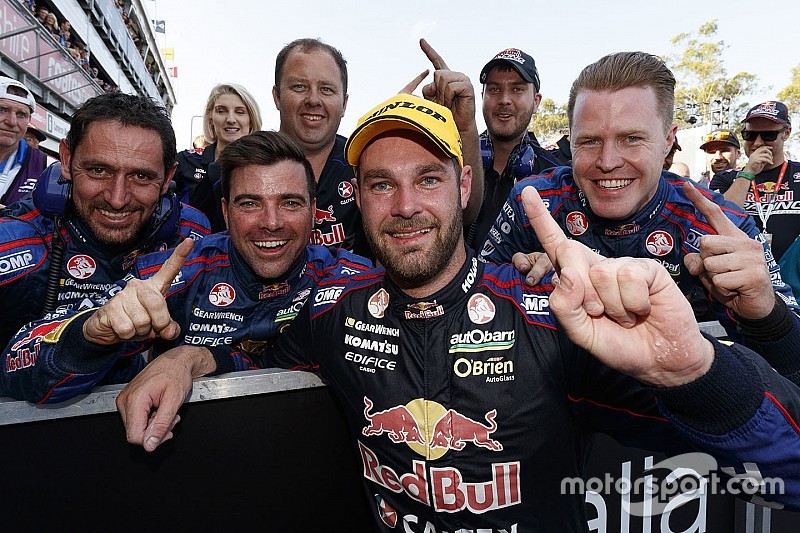 Shane van Gisbergen is the 2016 Supercars champion, after coming through the field to finish fifth after an early drive-through penalty in Sydney.

While teammate Jamie Whincup made light work of the 74-lap race, leading from start to finish with a perfect performance, van Gisbergen had to work hard to finish high enough up to secure the title.

The Kiwi’s dramas started on the first lap, when a sluggish start saw him drop down to fifth, before he was shouldered wide by Mark Winterbottom at the chicane and dropped another spot as he navigated through the tyre bundles.

His chances of taking the required fifth spot finish took an even bigger beating on Lap 10 when van Gisbergen fired into the rear quarter panel of Winterbottom’s Falcon at Turn 9, resulting in a drive-through penalty that sent the #97 Commodore down to 18th.

At that point it seemed unlikely van Gisbergen would be able to do enough to wrap up the title, but the game changed on Lap 50 when Dale Wood fired his Nissan into the wall. It sparked a perfectly-timed Safety Car period that allowed van Gisbergen to make his second stop and pop out in ninth.

He then rounded up Davison on the first lap after the restart, Rick Kelly a couple of laps later, and then a crucial double pass, going under Todd Kelly and then almost immediately past Craig Lowndes, in Lap 64.

That gave him the magic P5, but in typical van Gisbergen style it wasn’t enough. He went on to hunt down Scott McLaughlin, passing the Volvo on Lap 71, before a spirited battle with James Courtney over P3, with the added spice of McLaughlin breathing down their necks.

It all came to a head on the final lap, van Gisbergen finally making a move on Courtney stick to seal P3 to put an exclamation point on becoming the first New Zealander to win an Aussie Touring Car title since Jim Richards in 1991.

“[I had an] awesome car to come through like that, a lucky Safety Car, but good racing. What an amazing year, thanks to everyone.

“I just wanted to do a burnout, but we’ll do that tomorrow.”

Whincup, meanwhile, was forced out of title contention despite not putting a foot wrong all afternoon on his way to victory.

“We gave it our all, like we have all year,” Whincup said. “Big congratulations to Shane and all the #97 crew, they’ve been the most consistent. Not quite our year, but I hope everyone enjoyed the battle. I’m looking froward to doing it all again next year.”

Garth Tander was second after making up ground during the second round of stops, while it was McLaughlin who ended up fourth, having followed van Gisbergen’s lead and passing Courtney on the final lap.

Rick Kelly wound up as the best Nissan in sixth, his brother Todd having ended up in the wall after van Gisbergen went under him 10 laps from the end.

Will Davison was seventh ahead of Lowndes, who dropped off late in the race, while Tim Slade and David Reynolds were ninth and 10th.

Winterbottom should have been the best Ford in the field, but the contact with van Gisbergen left him stuck in the garage for four laps. He got back out, but finished down in 23rd.

That left Fabian Coulthard as the best Falcon down in 12th.