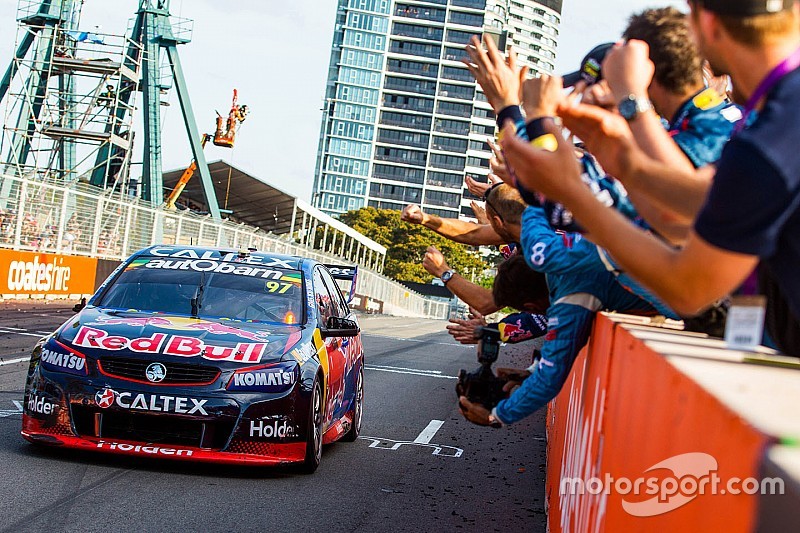 Shane van Gisbergen capped off his title-winning Supercars season in perfect fashion, winning the second leg of the Sydney 500.

The 74-lap race was a see-sawing battle between van Gisbergen and Garth Tander, from the first stint to the last.

It was polesitter Tander who made the best of the starts, pulling two seconds on the rest of the field – led by van Gisbergen – in the space of two laps.

But by Lap 8 it was the #97 Red Bull Commodore that had the pace, van Gisbergen putting the blowtorch on the rear of the Holden Racing Team entry. The pair ran nose-to-tail until Lap 20, when the Kiwi finally made a clean pass on Tander at Turn 1 to take over the lead.

There was almost another switch during the first stops three laps later, van Gisbergen having to make light contact with the front of Tander’s car in order to get into the fast lane in the lead.

They held station for the next 21 laps before both pitting under the race’s first Safety Car, before a second followed two laps after the restart.

That gave the HRT Commodore a sniff, Tander putting pressure on van Gisbergen for several laps after the second restart before the newly-crowned champion settled into his rhythm and pulled away.

Tander was given one more shot when Rick Kelly’s slow-moving Nissan led to a third and final Safety Car in the closing stages, but van Gisbergen was able to edge away over the six-lap sprint to the end.

“What an awesome day, and what a great race with Garth,” said van Gisbergen.

“I’m so stoked. For my first year, it’s been amazing joining this team. It’s a lifetime goal [to be champion], and to finally achieve it is pretty special. I want to come back and try it again.”

“We didn’t have the speed to go with Shane, I think he was just cruising around in front of us to be honest,” added Tander.

“The car was rally good. We struggled in the first stint, that’s where he got us, then we tuned it up in the next two stints and the car got a lot better.

David Reynolds did a stellar job to come home third, holding off a concerted charge from Jamie Whincup for the majority of the final stint. The Erebus driver soaked up the pressure expertly, including a last-lap lunge by Whincup at Turn 9, to grab an unlikely podium for the minnow squad.

“I just said to the boys ‘sorry it took so long’,” said Reynolds. “That race was really full on at the end there, I had so much stuff going on. My car has been beautiful all weekend, hopefully it’s a sign on things to come.”

While unable to get by Reynolds, fourth was still a decent effort for Whincup. Not only did he have to come from the back end of the Top 10, moving up to fifth during an impressive first stint, he then had to double stack during the second stops thanks to the Safety Car.

It meant he had to pass the likes of Scott McLaughlin and James Courtney during the last stint, before going oh-so-close to completing the comeback by getting by Reynolds.

McLaughlin came home fifth in his last race for Garry Rogers Motorsport, which, thanks to Craig Lowndes finishing down in ninth, was good enough to hand McLaughlin third in the final points behind van Gisbergen and Whincup.

“That’s the goal we set out to achieve this weekend,” said McLaughlin.

“It sort of hit home those last few laps that this is the last time I’m driving that car. I got out of the car, gave it a tap on the rood and said ‘thank you’.”

Courtney finished sixth after spending the first part of the race out of sync with the rest of the frontrunners. The #22 HRT Commodore was pitted 11 laps earlier than the likes of van Gisbergen and Tander, the clear air helping him into the lead during the second stint.

The first Safety Car then neutralised his strategy and put him into fourth on the road after the second stops, but he lost out to McLaughlin and Whincup before having to battle through a slow puncture in the closing stages.

There was plenty of damage to close out the season, with Tim Blanchard out sustaining heavy damage to the front of his CoolDrive Commodore on Lap 1.

Prodrive Racing’s Cam Waters only made it to Lap 39, a trip into the wall followed by a massive hit from Fabian Coulthard who, unsighted, ran into the Monster Ford as it was reversing out of the armco. The contact ended Waters day, forced Coulthard to go 13 laps down, and caused the race’s first Safety Car period.

The second was thanks to Jason Bright, who signed off on his time at Brad Jones Racing by glancing the wall on the run to Turn 6 and ending up stranded down the escape road.