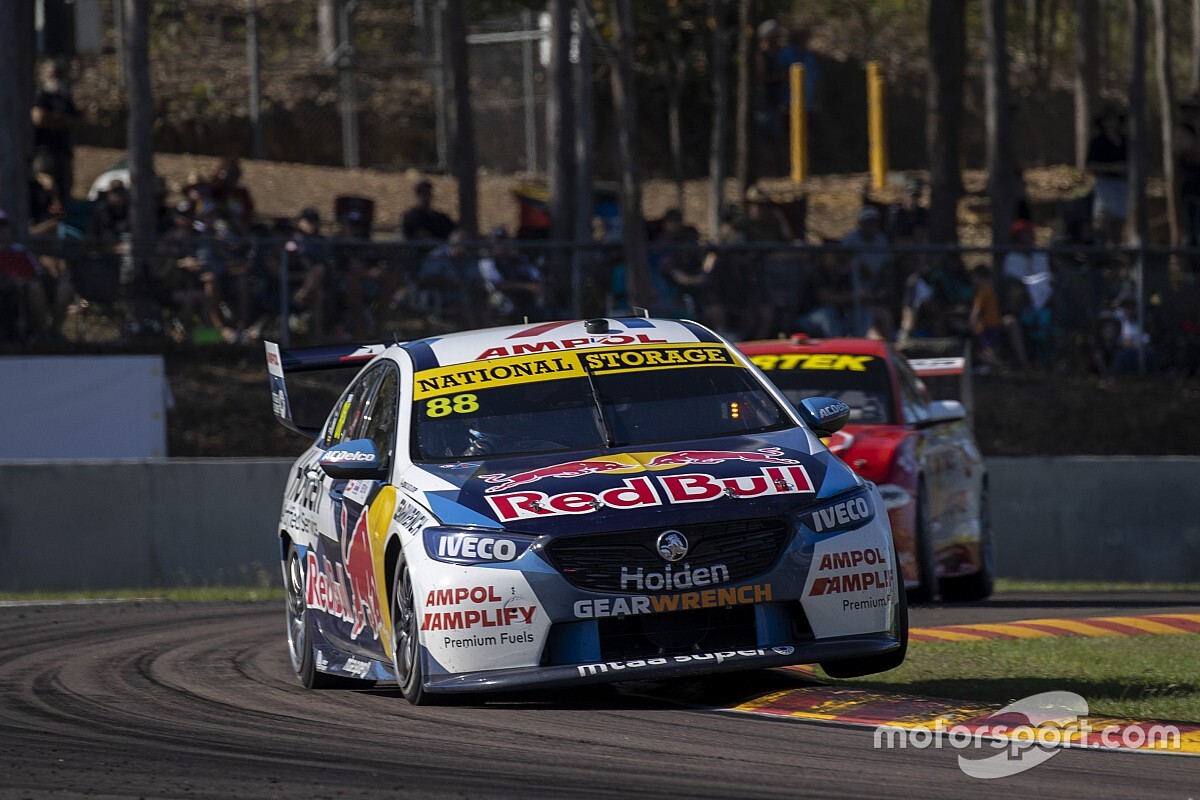 Whincup was involved in a pitlane scuffle with Fabian Coulthard in a tensely-contested final heat of the Darwin Triple Crown, the former leaving his bay right as the latter was arriving in the bay in front.

As a result Coulthard was forced to brake as he deviated from the fast lane, the pair still making light contact despite the Kiwi's intervention.

However, unlike Saturday's race when Whincup was penalised for being released into the side of Anton De Pasquale, the seven-time series champion escaped sanction for the Coulthard contact.

That was despite the incident being reviewed by officials both at the time, and again after the race at the request of DJR Team Penske.

According to DSA Baird, the key difference between the two Whincup incidents was that Coulthard was already turning off the fast lane.

The pit release rules specifically state that 'a car being released from its pit bay must give way to a car already wholly in the fast lane'.

“There’s a difference between a car travelling down the fastlane and a car coming into its pitbox," Baird told the official Supercars website.

“If you read the rule, the paragraph in there about an unsafe release relates to a car being wholly in the fast lane.

“[During the race] we had to make a decision with the available footage and reports from pitlane that we had, and we felt like there wasn’t major contact.

“Without doubt, after looking at the on-board [post-race], there would have been [more contact] had Fabian not yielded, but there’s also a clause in the rulebook that everyone has a duty of care.

“You gain a little bit one time, you lose a bit another, with the jostling of getting in and out of the boxes.

“It’s very different to the [Saturday] Whincup penalty where he was released into the path of a car solely in the fast lane.

“DJR Team Penske had a right to protest the decision, but ultimately everyone in our pitlane has to be flexible at some point.

“At the end of the day Fabian came in right behind [Chaz] Mostert, he went out behind Mostert, and it wasn’t a position change for Whincup.

“People will always have their opinions on it. If I give the penalty out they’ll say it was harsh, because there was give and take, and if I don’t, that’s not good enough either.

“Sometimes I’ve got to sit there and go ‘what do I do? What is fair for the sport?’.”

The incident had wider implications on the race weekend, with Whincup and Coulthard finishing equal on points, but Whincup securing the Triple Crown as he won the last race.

Had he been penalised, or even yielded to Coulthard in pitlane and finished second behind Scott McLaughlin, Coulthard would have won the Triple Crown despite not winning any of the three races.

Coulthard admitted last night that he was disappointed with the decision not to refer the matter to the stewards.