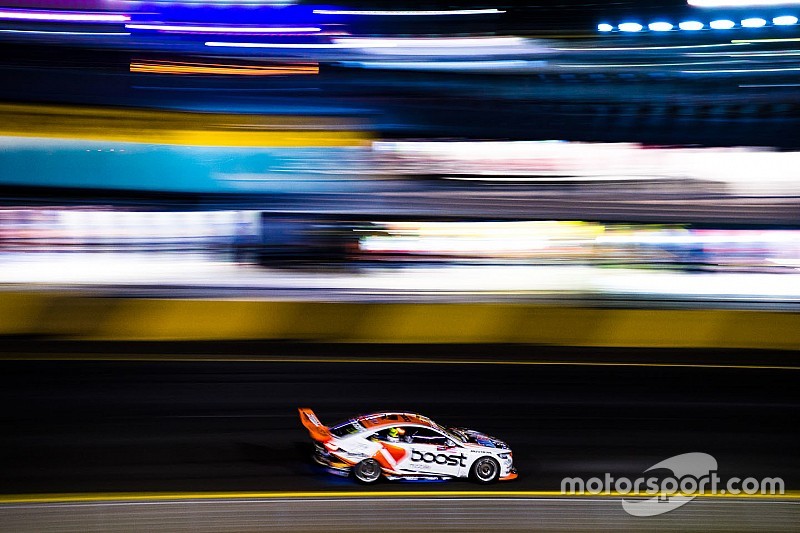 The pacesetters from this evening's first Supercars practice session under lights have described it as feeling like "a million miles an hour" and a scene out of 'Days of Thunder'.

The 40-minute session was the first under lights for the series on Australia soil since 1997, making it a unique experience for the majority of the field.

And it provided plenty of wide-eyed reaction, Scott Pye admitting that the sensation of speed was a level above that experienced during day time conditions in the cars.

"The last time I felt that fast was probably when I was in rookie [karts] in Adelaide," he said after going third quickest.

"You're driving in the dark and it feels like you're going a million miles per hour. The track is cold as well, which always feels nice, and the engines run better.

"I know Turn 1, you're turning flat there anyway. Trying to pick a marker there and see the edge of the track is a little more difficult, but it's pretty good fun.

"You end up being kind of a fan again, you're watching the replays on TV of the cars blowing flames, and the reflective stickers when you're behind them. It's a cool thing to be involved in."

Mark Winterbottom added that his first experience through the incredibly quick left-hander Turn 1 felt like something out of 'Days of Thunder'.

"Yeah I thought it was cool, that first lap going into Turn 1 and kind of not know what was going to happen when you come out the other side. It was like Days of Thunder, Cole Trickle – just hold it flat," he said.

"The spectacle, you kind of get a little bit distracted when you see other cars go around with the reflections and stuff. You become half a spectator then realise you've got to get around the corner. It's a cool spectacle."

According to Chaz Mostert, who was fastest in the session, the dark conditions meant there was no point during a lap where drivers could relax.

"You don't get a judgement of speed when you're in the patches of dark. All of the sudden you come flying into the light and try and jump on the brake pedal at a big stop corner and it's quite exciting," he said.

"It's pretty tricky, because you miss your judgement a little bit. It's a good challenge, it was good fun out there.

"Normally when you get on the straights in the day time you relax your hands and let the car flow. But here tonight I don't think I let the steering wheel loose once, I was tense the whole time.

"I'm sure the more we get into the race we'll get more comfortable and relax a bit. But this session was hard. We were doing qualifying laps in the dark, so you're trying to go that extra 10 metres that you'd actually prefer not to, because you didn't feel comfortable."

While it's been more than 20 years since Supercars raced under lights in Australia, there were night races more recently at the Abu Dhabi circuit, the last coming in 2011.

However, unlike in Abu Dhabi, the 50 temporary lighting towers at SMP have been purposely placed to create pockets of darkness and a dramatic night feel, rather than picture-perfect, daylight-like conditions.

"Abu Dhabi at night time is brighter than here at 1 o'clock in the afternoon," added Winterbottom.

"That place was ridiculously lit up. To me, that wasn't like we ran at night time. It didn't feel like a night race. This, tonight, was definitely what felt like night time driving.

"You can't compare the two, this is probably more like what Calder was in 1997 where you bring in the lights and make it work. It makes [the cars] look a lot better because they go in and out of the dark, they are reflective, you can see the brake discs glow and stuff like that."

Adding to the challenge is that teams have been told to run standard headlights, which Winterbottom said were useless in terms of providing any light.

"They're not effective, they're not doing anything," he said. "GT cars run in the dark with no lights on the circuit and they run with headlights, but our lights are like two candles. They are nothing.

"We're not using the lights as a visibility tool, we're using them as reference to show cars where you are."

Supercars will have one more practice session during daylight hours tomorrow, before a late afternoon qualifying session to determine the grid for the single 300-kilometre race.

That will take place entirely under lights, kicking off at 7:20pm local time.