Stoner to take on Webber and Whincup in unique event

The greatest race in the world will be held in Australia and is called The Aussie Speed Showdown. Casey Stoner, Mark Webber and Jamie Whincup will challenge one another in the battle of the Bike vs V8 vs F1. Plus a special 'Fish out or water' event. 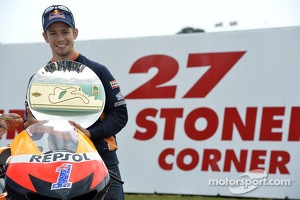 Top Gear Festival Sydney has secured Casey Stoner who, for the first time since his retirement, will return to a bike – a Honda CBR1000, on track at Sydney Motorsport Park to race against

With three of the most famous Australian racing drivers at the helm, The Aussie Speed Showdown will see Casey, Mark and Jamie race around the world class Sydney.com North Circuit at Sydney Motorsport Park, at full speed in a battle for the ultimate bragging rights.

Casey Stoner will also be taking on Craig Lowndes in a unique Top Gear challenge: 'Fish out of Water' where Stoner will be behind the wheel of Craig's Red Bull Racing Australia V8 and Craig will be on a Suzuki.

These once in a lifetime race challenges are just the latest announcements of what will take place at the greatest outdoor motoring festival on earth, the first ever Top Gear Festival Sydney at Sydney Motorsport Park, Eastern Creek for one weekend only – and only in Sydney on Saturday 9th and Sunday 10th March 2013.

Stoner finally lifts lid on his plans for 2013