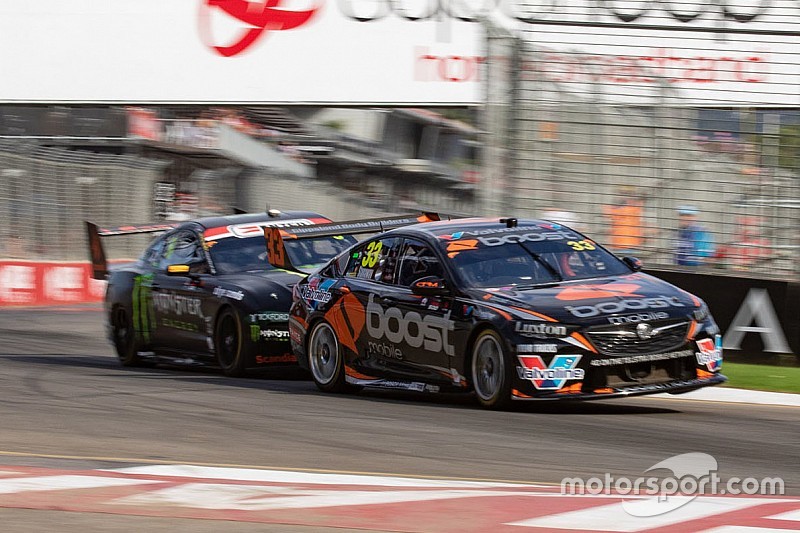 Richie Stanaway has been disqualified from Saturday evening's Supercars race at Albert Park and slapped with a $10,000 fine for his fiery run-in with Lee Holdsworth.

Stanaway and Holdsworth engaged in a heated post-race exchange in the Albert Park paddock on Saturday evening, with Holdsworth left fuming following a number of clashes between the pair across the two Saturday races.

Holdsworth then gave an explosive interview on TV, labelling Stanaway an "imbecile", while Stanaway argued that Holdsworth was also to blame for their on-track tussles.

The stewards have sided with Holdsworth, however, with Stanaway copping a harsh penalty for the charge of "Article 2.1.3 of Schedule B2 Code of Driving Conduct (Dangerous Driving)."

He's been disqualified from the Saturday evening race, will be forced to start today's race from pitlane, and been slapped with a $10,000 fine, half of which is suspended until December 31.

Stanaway was also given a post-race five-second penalty for contact with Holdsworth in Saturday's earlier sprint race.

Triple Eight also came away from Saturday's evening race a little lighter in the wallet, the team hit with a $5000 fine and a loss of 30 teams' championship points thanks to Shane van Gisbergen's car losing its wheel.

Will Davison, meanwhile, was dropped from seventh to 10th in the evening race's final results after being pinged with a five-second penalty for careless driving during a run-in with James Golding.