Lee Holdsworth: "It's a little bit disappointing as we had a really good car at the start of the session,”

The Erebus Motorsport crew held its collective breath in the dying stages of the qualifying session for Sunday’s Supercheap Auto Bathurst 1000 at Mt Panorama in anticipation of Lee Holdsworth slotting his Irwin Racing E63 AMG into tomorrow’s top 10 shootout.

Holdsworth sat in the top 10 for the majority of the 40-minute stint and rested “on the bubble” in 10th position for almost three minutes before the chequered flag dropped to end the session with his time locked in at a 2:08.93. 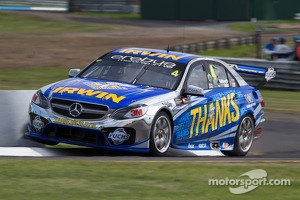 Ironically, it was virtually the last two cars to cross the line of teammates Scott McLaughlin and Alexandre Premat from Garry Rogers Motorsport that spoiled the party and Holdsworth will start Sunday’s race from 12th.

Steve Johnson was called on to qualify the #9 SP Tools Racing E63 AMG and he did a terrific job slotting into 16th with a 2:08.93 lap despite not quite finding a comfortable balance.

The #47 Heavy Haulage Australia E63 AMG of Tim Slade and Andrew Thompson was involved in a heavy accident yesterday and did not take part in any of today’s sessions.

The Erebus crew will be working around the clock to rebuild the car with some parts shipped in from the Gold Coast this afternoon in an effort to make Sunday morning’s warm-up and then the 161-lap race.

Jamie Whincup set the quickest time with a 2:08.00 lap while Dean Fiore was the slowest of the 27 cars that took part with a 2:09.69 – meaning that the field was separated by just 1.69 seconds - equating to approximately just 66m on the challenging 6.21km Mt Panorama circuit.

There is a 50-minute practice session for both drivers tomorrow at 10.05am while the top 10 shootout will be at 5pm.

LEE HOLDSWORTH – IRWIN Tools Racing E63 AMG: "It's a little bit disappointing as we had a really good car at the start of the session,” said Holdsworth of being bumped from the top 10.

"I'm not sure if it's the fuel load coming down but we kept losing more and more rear grip, and it became quite a handful.

"It's a long day on Sunday and we can tune it up in practice tomorrow. As long as we have a good car on Sunday I'm sure we can end up with a good result.

“Overall it has been a busy and productive weekend for Irwin Racing and Erebus Motorsport and we have put a few more bits of the foundation in place.”

CRAIG BAIRD #4 IRWIN Tools Racing E63 AMG: “I had a pretty busy day with the V8 Supercar and Carrera Cup sessions, but the more seat time around here the better,” said Baird.

“I was holding my breath hoping that ‘Leroy’ could stay in the top 10 for Irwin and the rest of our sponsors, but it was not to be.

“Being 10th or 12th in qualifying will make no difference to our race chances on Sunday and I think we have worked our way towards a good race package.”

“We did not quite get the balance and set up right, but that was probably the track going away from us a little bit.

“We made some positive changes as the session progressed and for the guys to do that with the limited time we had is very encouraging.

“To be that close to Lee given my time in the car this year is personally satisfying.

MARO ENGEL #9 SP Tools Racing E63 AMG: “I continued to learn as much as I could today,” said Maro.

“There were a lot of red flags in my session which made it pretty tough to get a good run.

“The team chose Steve to qualify the car and I look forward to battling our way forward from mid pack on Sunday.

“This is an awesome place and I have really been looking for something to compare it to.

“The best I can think of is Macau. From turn two to Forrest Elbow it is like a concrete tunnel with lots of constant turns here at Bathurst and that’s just like Macau.”

TIM SLADE - Heavy Haulage Australia – E63 AMG: “It was tough watching everyone going around out there today,” said Slade.

“I have terrific respect for everyone in this team that is working so hard to get our car back out there for the race on Sunday.

“I am confident they will hit the deadlines and then we have the job of rewarding them with a solid result.”

ANDREW THOMPSON - Heavy Haulage Australia – E63 AMG: “It’s always tough being a spectator, but the whole Erebus Motorsport team has shown so much in so many areas this weekend,” said Thompson.

“Lee and Steve gave us some very promising signs in qualifying and the dedication of everyone trying to get our car back on track is another great story in itself.

“There is a lot of work to do, but bring on Sunday.”

EREBUS MOTORSPORT – CEO – RYAN MADDISON: “I think today was a solid result for everyone who has worked on the Erebus program this year,” said Maddison.

“To be sitting on the bubble for the top 10 shootout for more than three minutes and then only to be bumped by a race team celebrating its 50th year in Australian motorsport is pretty satisfying.

“Sure we would have loved to put an Erebus Mercedes in the top 10, but we have a straight race car, confident drivers and a race package we believe we can build on during 161 laps of racing on Sunday.

“I think this weekend has been another turning point for the team no matter the outcome on Sunday and to be saying that on Friday afternoon justifies the effort and commitment from everyone involved.

“Lee (Holdsworth) and Steve (Johnson) did a great job and while the 47 car has obviously had its drama Tim (Slade) and Andrew (Thompson) will punch on from the back of the pack if we reach our goal of getting it back together for Sunday morning’s warm-up.”

Erebus Motorsport on early accident in 3rd practice at Bathurst 1000