The safety car pulled in on lap four but was back out again on lap seven after Greg Murphy was punted into the wall ending his race. 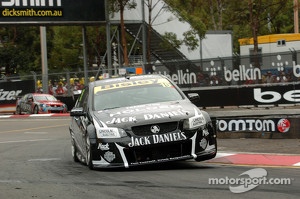 The following lap Jack Daniel's Racing’s Tim Blanchard pitted for fuel and with the safety car back into pitlane, racing resumed once again on lap 11.

The order remained unchanged at the front as Kelly pitted on lap 51 for the final time, for fuel and tyres.

On lap 58 Blanchard made his final tyre and fuel stop and tyres and with ten laps left the top five were Davison, Lowndes, Courtney, Slade, and Whincup.

On the penultimate lap Michael Caruso retired the Fujitsu Commodore with no brakes and the following lap Davison took the chequered flag for the eighth time this year, followed by Lowndes, Courtney, Slade and Whincup, who came through the field from 24th.

Rick Kelly: “There’s no doubt we’ve had a tough year but finished it on a comparative high this weekend with a sixth and eleventh. I’m really impressed with how well the team has stuck together this year through the tough times.

If we can hang in together that well in the tough times, I know we will enjoy the good times next season when we can challenge the best of them.

From me, I want to say thanks to everyone, sponsors and supporters and especially Holden, for all their support over many years. I hope we did them proud and I am really looking forward to the future”.

Tim Blanchard: “The car was good today but I had a few issues with my foot and didn’t have any feeling in it for most of the race. So I just stayed out of trouble and brought the car home in one piece.

It was great to be a part of the team and my thanks to Rick and Todd for their support and giving me the opportunity”.

End of an era opens door to bright future

Supercars: Stone predicts Gen3 will be delayed until 2023