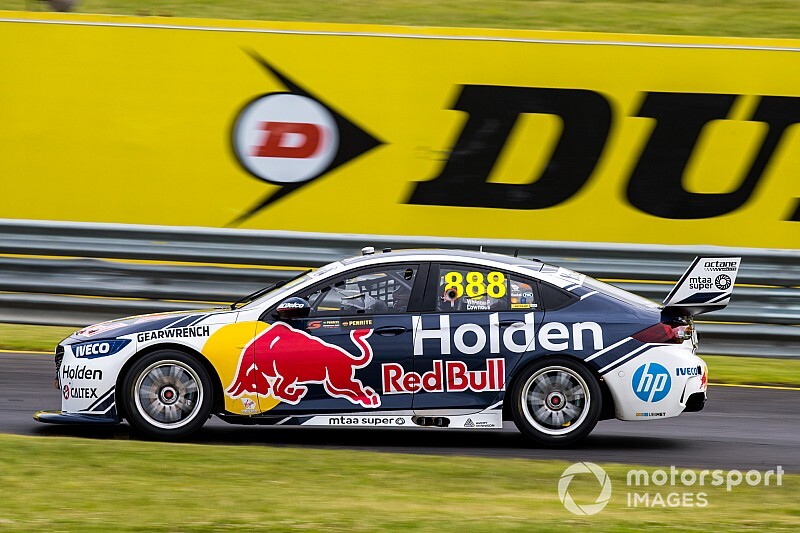 Scott McLaughlin has been crowned the 2019 Supercars Champion, as Jamie Whincup and Craig Lowndes won the Sandown 500 in dramatic circumstances.

McLaughlin and co-driver Alex Premat only needed to finish the race for the Kiwi to claim the 2019 title, a layer of complication added to that task when the #17 was busted to the back of the grid over the Bathurst 1000 engine controversy.

It wasn't exactly a straightforward race for the pair, their afternoon including a 15-second penalty for a pitlane infringement, however 9th place was enough to secure McLaughlin his second-consecutive crown.

As for the race, Whincup and Lowndes prevailed thanks to late drama for their teammates Shane van Gisbergen and Craig Lowndes.

The #97 Red Bull Holden had been set to complete a remarkable comeback from 24th on the grid, a fine opening pair of stints from Tander setting up a sure victory.

However a broken damper with 10 laps required a heartbreaking two-lap stint in the pits, opening the door for Whincup and Lowndes to snatch the win.

It's a fifth Sandown 500 win for Whincup and a sixth for Lowndes, the pair now on 117 and 110 career victories respectively.

Lowndes faced little trouble over the first stint of the race, the veteran quickly settling into a comfortable lead over fellow front-row starter Bryce Fullwood.

Behind the top two there were some unusual names right in early contention, Jake Kostecki creating a stir with a forceful pass on Luke Youlden for third place at Turn 9 on the third lap.

At the other end of the field Garth Tander made a brilliant start from the back row, working his way into 13th by Lap 10 and into the Top 10 by Lap 20.

Running deeper into the first stint than most, a Lap 32 shunt between Youlden and Dale Wood was perfectly timed for Tander. The subsequent Safety Car opened the door for him to dive into the lane and emerge in fifth place.

Tander continued his charge when the race went green on Lap 36, swiftly clearing the likes of Fullwood and Randle to end up running second, a little over 5s behind teammate Lowndes.

The gap got as low as 2s before Lowndes pitted on Lap 56 to hand over to Whincup, Tander continuing as the race leader for another 16 laps before making his second stop.

At that point van Gisbergen took over the #97, resuming a little over 20s behind his teammate.

The Kiwi was able to close back to around 13s over that third stint, the deficit more like 10s after the Red Bulls made their next round of stops on Laps 94 (Whincup) and 106 (van Gisbergen).

It only got closer from there, van Gisbergen closing to within a second as the laps ticked down to the final round of stops.

By Lap 134 van Gisbergen was right on Whincup's gearbox, the lead changing hands a couple of corners before the #888 dived into the lane.

Van Gisbergen stayed out for three more laps before making his final stop, emerging with a whopping 8s lead.

From there the comeback looked complete, van Gisbergen only needing to cruise to the chequered flag. But a broken right-rear damper put paid to that, the Kiwi forced into the lane for lengthy repairs with just 10 laps to go.

That handed victory to the #888, Whincup and Lowndes sealing the Enduro Cup title in the process.

"Obviously commiserations to #97, they did a great job today, but at the same time we've been on the receiving end of that one as well many times," said Whincup.

"Big thanks to [Lowndes], he's done an amazing job all season of endurance. It's great to be in victory lane."

Chaz Mostert and James Moffat worked their way up to second place, albeit 20s down the road from the winners. The result was a fitting one, helping Moffat celebrate his father Allan's 80th birthday.

There were two Tickford Mustangs on the podium thanks to van Gisbergen's late drama, Lee Holdsworth and Randle finishing third – ending a 2045-day podium drought for Holdsworth.

Fabian Coulthard/Tony D'Alberto finished fourth, ahead of Scott Pye/Warren Luff and Will and Alex Davison.

James Courtney/Jack Perkins made it two Walkinshaw Holdens in the Top 10 with seventh, while Andre Heimgartner/Fullwood slipped back to eighth, their race including a 15-second penalty for speeding in pitlane.

The McLaughlin/Premat car, meanwhile, never looked in the running for a top result.

Left at the back of the grid as part of the Bathurst engine breach, Premat was unable to follow Tander through the field in the first stint.

The Frenchman never climbed higher than the mid-teens, before the car was hit with a 15-second time penalty when it was dropped with the fuel hose still attached during the first stop.

That meant McLaughlin started his stint down in 20th, slowing working his way up to ninth to wrap up the 2019 title.

Jake and Brodie Kosteckis, meanwhile, finished down in 16th after an action-packed afternoon.

From that fast start to the race there were a number of run-ins, including Jake helping Michael Caruso into the Turn 4 wall.

Caruso's co-driver responded by calling the pair "dumb" on TV, Brodie letting his middle finger do the talking while lapping a wounded Monster Mustang later in the race.