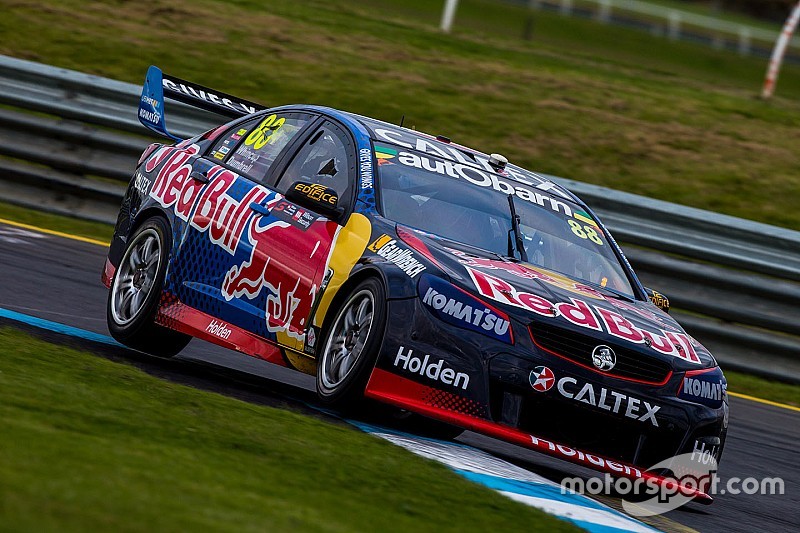 Jamie Whincup put a Red Bull-backed Triple Eight car on top for the first time this weekend, leading the way in the fourth and final practice session for the Sandown 500 by just 0.0002s.

Whincup sat second behind Volvo’s McLaughlin when the session was red flagged for debris with 11 minutes to go, but had the best of the final 10 minutes of running with a 1m08.924s to match McLaughlin’s near identical time.

The difference fell in Whincup’s favour by just 0.0002s, and with McLaughlin failing to improve on his final run it was enough to secure P1.

“There's nothing in it,” said the points leader. “It’s only practice. The car is in reasonable condition, we’ll keep tuning and see what we can do with it in quali.

“There’s a big difference in conditions today, it’s much warmer than yesterday. It’s a big balancing act going on behind the scenes with the engineers.”

Behind McLaughlin, Shane van Gisbergen popped up in third late in the session. It took the Kiwi forever to set a representative time, going all the way from 23rd to third with a 1m08.989s just 90 seconds from the end.

It was van Gisbergen’s cool down lap that garnered the most attention, however. The #97 Triple Eight Commodore got in the road of a flying Garth Tander, who was set for a decent improvement after setting a purple second sector. Having been baulked Tander was unable to improve, and finished the session in sixth.

“Sightseeing Kiwi at Dandenong Road. It’s nice, the sun’s out, so why wouldn’t you stop and go slow?” joked Tander afterwards. “It’s only practice. We were up the front pretty much all session, so it’s encouraging going into qualifying. It would be nice to do the lap time, but next session is when it counts.”

Penske’s Fabian Coulthard finished up fourth fastest, falling just short of breaking into the 1m08s. James Courtney was next ahead of Holden Racing Team team-mate Tander, with Chaz Mostert (Prodrive Ford) and Scott Pye (Penske Ford) next in line.

Andre Heimgartner was a late improver to slot into ninth for LD Motorsport, with Will Davison bouncing back from a tough opening day in the Tekno Commodore to round out the Top 10.

The most noteworthy omission from the Top 10 was Craig Lowndes, who was just 12th in the #888 after Steve Richards was so fast in the car during the co-driver sessions yesterday. The #1 Prodrive Ford finished down the order too, Mark Winterbottom’s time just 15th fastest.

Despite the track being bone dry, it was declared wet for the session so that teams could road wet tyres ahead of forecasted heavy rain tomorrow.