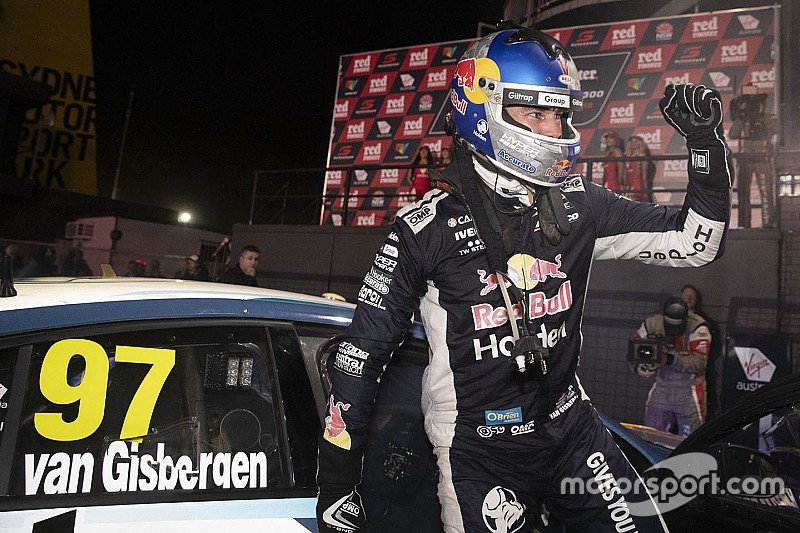 An extra set of tyres and a decision to 'sacrifice' qualifying and practice were key to Red Bull Holden's one-two finish under lights in Sydney yesterday, according to the team and its drivers.

That was thanks to better tyre condition following a late Safety Car restart, the two factory Holdens pitting for brand new rubber during the caution and returning third and fourth in the queue.

The guys they were racing, McLaughlin and Craig Lowndes, had pitted four laps earlier, and not taken on greens.

According to race winner van Gisbergen, that tyre condition can be traced back to the team's uncharacteristically poor showing in practice and qualifying.

Both of the Red Bull cars missed the Top 10 on combined practice times, which meant going through Q1. While they both cruised through to Q3, van Gisbergen was unable to match the Penske Fords, while Whincup didn't even bother with a final run at pole.

"We played a bit of a different game this weekend with not putting our best foot forward in terms of tyres," said van Gisbergen.

"We sort of sacrificed qualifying a little bit, but it didn't hurt us too bad in the end. And at the end of the race, we both had a new set of tyres, so it worked out quite well."

Team manager Mark Dutton further explained the situation: "We chose on car #1, especially, not to put all of our eggs in the qualifying basket.

"I don't think [McLaughlin and Lowndes] had green tyres for the end of the race and we did on both of our cars.

"It wasn't just the tyre differential, the laps they'd done earlier, it was that we also had greens. That wasn't an accident.

"The engineers planned that and were prepared to pay a price, it's pretty tough decision to make."

While ultimately a shrewd decision, there was an element of risk. For the late tyre gain to be effective a Safety Car was required, the team forced to sweat on it with the first caution not arriving until Lap 58.

Had it not come, Dutton admits third and fourth would have been the best his cars could have done.

"Our strategy, by that stage, we'd made our bed – it was a Safety Car strategy," he said.

"At best we were going to finish third [without a Safety Car]. We thought there was going to be a Safety Car, so we played that thing, but it was less and less likely towards the end.

"We knew the way we'd played it, if there was a Safety Car it would play in our favour. And definitely there is a portion of luck there, good fortune. But fast cars, looking after your tyres, running your strategy, the guys reacted to the pitstop really well... we did everything to prepare ourselves.

"If there was no Safety Car, then sure, we ran the wrong strategy. But we thought there would be, and we backed having the late pace to pay dividends."

Hazelwood on Sydney wing failure: I knew I was in a world of s**t