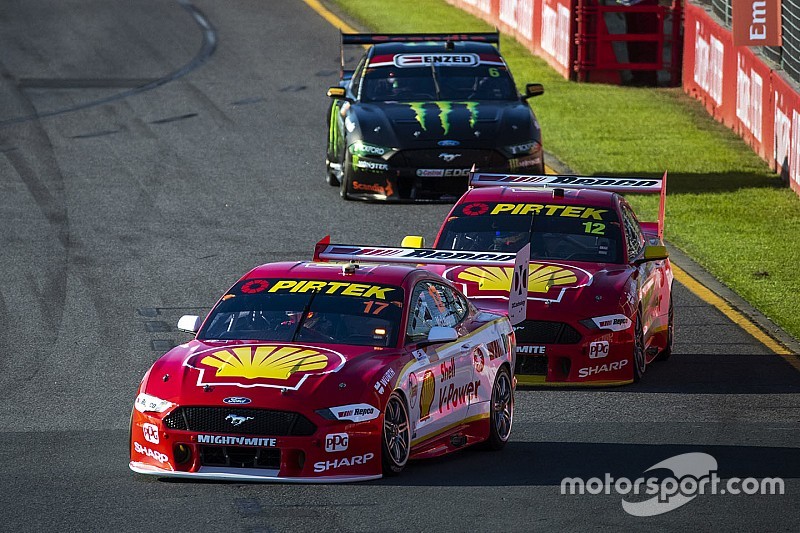 David Reynolds says an aero advantage from the Supercars-spec Mustang is "beyond obvious", as Ford's new racer remains unbeaten after the first six races of the season.

Mustangs took all four poles and all four wins from the Albert Park races, three of each for Scott McLaughlin and one of each for Chaz Mostert.

There was also a Mustang top five lock-out in the Friday evening race, which included Mostert charging from 22nd on the grid to fifth, and an all-Mustang podium from Sunday's sprint race.

McLaughlin's three wins at Albert Park came despite DJR Team Penske being asked by Supercars to remove an overweight exhaust system, fitted for better weight distribution, after the Adelaide 500 amid a fevered paddock debate over parity.

Centre of Gravity tests were set to take place with a sample of 10 cars at Kelly Racing on Monday, to address concerns from Holden teams regarding creative weight placement issues such as the DJRTP exhaust.

However Holden driver David Reynolds is far more concerned about the Mustang's aero, claiming its performance on the long, sweeping layout of Albert Park show that the car has a mid-corner advantage.

"I assume [the advantage is] aero," said Reynolds on the new Below the Bonnet podcast he co-hosts with Tickford enduro driver Michael Caruso.

"Centre of Gravity, you can muck around with it but as a driver you never really notice it, feeling-wise. There is a lot of weight to shift.

"At Adelaide [the Mustangs] had a small advantage, but at the AGP they had quite a large advantage – and that's predominately an aero-type track.

"Chaz basically started last [on Friday], and I started seventh or 10th or something, and he got to me before the first pitstop. Surely that's not right, in an even category.

"It was like I was on a hard tyre and he was on a soft tyre. That's how easily he passed me and pulled away. He pulled seconds on me straight away.

Reynolds has been one of the more outspoken of the Holden drivers regarding parity, having hinted at an unfair advantage for the Fords following the Adelaide 500.

The first episode of Below the Bonnet, which also features Motorsport.com's Andrew van Leeuwen, is available right now.

Below the Bonnet podcast with David Reynolds and Michael Caruso