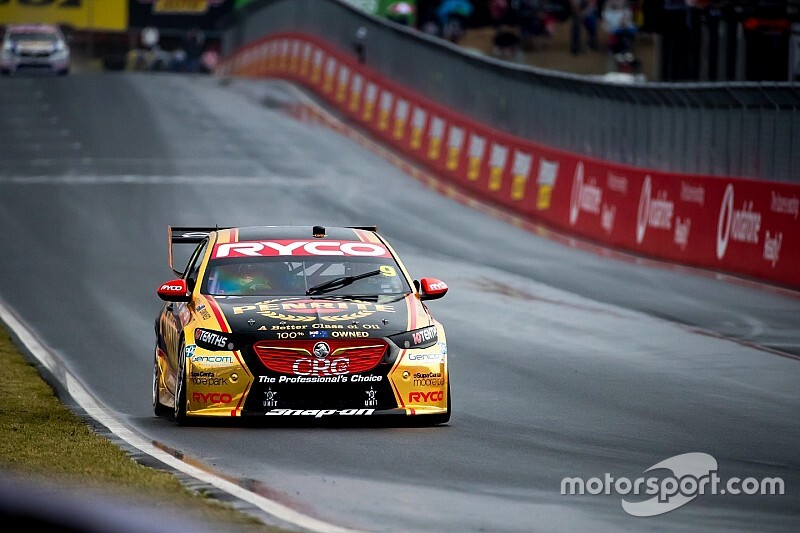 David Reynolds says he's disappointed he won't get the chance to ’tear the face off his car' during tomorrow's Top 10 Shootout, after an underwhelming showing in qualifying for the Bathurst 1000.

It's been a rollercoaster weekend for the Erebus driver, his Penrite Holden requiring an all-night fix after co-driver Luke Youlden crashed in practice yesterday.

There were promising signs from the repaired car during practice earlier today, only for Reynolds to struggle in the wet weather that hit qualifying.

He not not only missed the Top 10 Shootout, but will start the Great Race from way down in 22nd.

While not ruling out a fairy tale win from the back end of the grid, Reynolds says he is disappointed to miss the chance to flex his single-lap muscle in tomorrow's Top 10 dash.

"If it was dry, my car’s good enough for the front-row," said Reynolds.

"I just wish I had a crack at the Shootout because I was looking forward to tearing the face off my car. Not crashing, getting up on that wheel and having a crack."

While surprised at the sheer difference between the wet and dry pace, Reynolds admitted that rain has been an Achilles' heel for his side of the garage for some time.

"That was our wet set-up, so probably our dry set-up is better for the wet, if that makes sense," he said.

"We did our best, but it’s been an inherent problem with our car for a while. We’ve had speed in the wet at times, but not of late."

Reynolds said Thursday's crash played no role in the poor qualifying performance, the overnight repair making the car as good as new.

"It was literally perfect. As Luke drove out [in practice], it was basically perfect," he said.

"[The team] spent all night on the car, that’s why I feel so bad. They worked so hard and are so buggered, to end up 22nd.

"But that’s Bathurst, it’ll love you one day and f**k you the next day."

Reynolds is also optimistic that a big fightback on Sunday is on the table, based on the outright pace of his car.

"I’m really looking forward to it because it’s going to be fun lunging people," he said.

"I’m going to have to get busy behind the wheel, but I’m looking forward to it.

"I’m two sessions behind everyone but I’m still as fast as everyone."