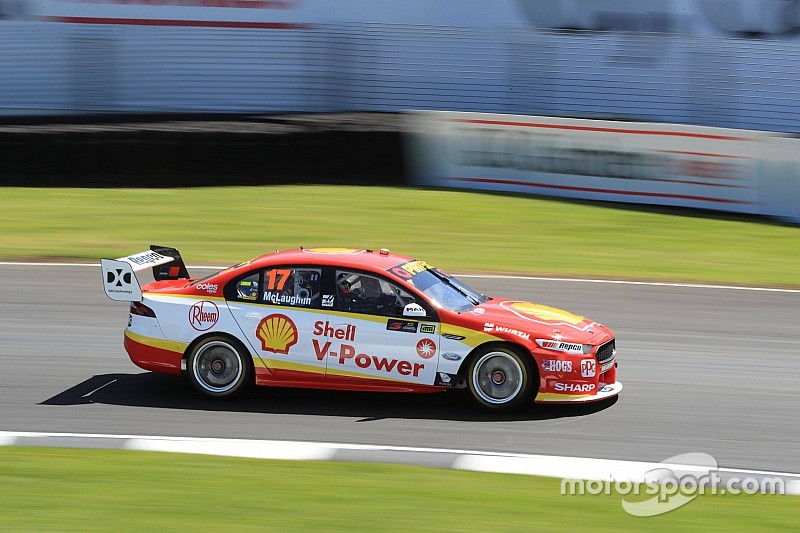 The Penske driver went quickest just before the quarter-hour mark in the session, shading early pacesetter and title rival Shane van Gisbergen with a 1m03.176s.

He then almost improved on at the midway point, going purple in the first sector before falling 0.003s short of his own benchmark.

While that earlier time would have been good enough for top spot anyway, McLaughlin did finally go quicker, ending up on a 1m03.115s.

"It was a really good session for us, we got through a lot," said McLaughlin.

"We'll just have a think about a few things, we've got a couple of little things to work on for the car and also myself . I'm a little slower in Turns 1, 2, 3, 4 than I wanted to be.

"We'll try and look at that driving-wise and come out stronger."

Craig Lowndes led the trio of Triple Eight cars behind McLaughlin, the veteran improving on his final run to close to within 0.08s of the Penske Ford.

That relegated van Gisbergen to third, the Kiwi not improving on his early time, while Jamie Whincup improved with five minutes to go to slot into fourth, just over a tenth off the pace.

Fabian Coulthard was fifth quickest, followed by Lee Holdsworth, Nick Percat, and Michael Caruso – the top eight all within two-tenths of the pace.

Scott Pye and Rick Kelly rounded out the Top 10.

While there were no crashes during the 40-minute hit-out, there were some wild spins. James Courtney took a high-speed tip across the grass after running wide at Turn 1, while Richie Stanaway found himself bouncing over the Turn 6 kerbs facing the wrong way.