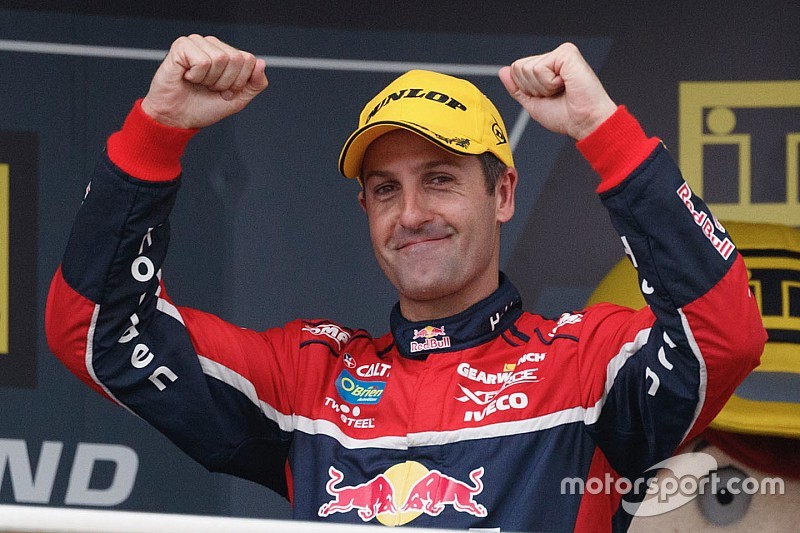 Whincup and McLaughlin ran nose-to-tail throughout the 200-kilometre race, the 5.9s gap a relative blowout given they were separated by less than two seconds for the first 50-odd laps.

The win means Whincup will take a narrow 30-point lead over McLaughlin into the season finale in Newcastle in three weeks.

The race got off to an explosive start when the three lead Prodrive Fords – running third, fourth, and fifth – tangled with each other at the hairpin at the first lap.

Cam Waters, sitting at the back of the Prodrive train behind Mark Winterbottom and title contender Chaz Mostert, appeared to kickstart the kerfuffle by tagging Winterbottom with an ambitious lunge up the inside. Winterbottom then went into the back of Mostert, those two left stranded in the middle of the track while Waters took off in third.

With all of that in their mirrors, front row starters Whincup and McLaughlin were able to bolt into a handy lead. They ran in that order until Lap 10 when McLaughlin peeled off to make his first stop, Whincup following suit a lap later and retaining the effective lead.

The battle continued through the second stint, the gap hanging around the 1.5s mark as Whincup led his chief title rival. On Lap 34 Whincup reversed the trend from the first round of stops and dived into the pits from the lead, McLaughlin doing likewise a lap later.

There was very little in it as McLaughlin emerged from the pits for a second and final time, Whincup sweeping across the front of the Penske Ford into Turn 1 to retain the lead by half a second.

As was the case in the first two stints, Whincup was unable to break away. This time the gap hung around the six-tenths mark, McLaughlin shadowing the Red Bull Holden as they worked through lapped traffic.

It wasn't until Lap 52 – 17 laps after McLaughlin's last stop – that the gap eked out to over a second for the first time. Even then it was back to eight-tenths a lap later as the tense battled waged on.

With 15 laps to go Whincup finally broke away, the gap hitting the two-second mark for the first time all race. With that small reprieve, he was able to set up a 5.9s win, helped as McLaughlin went into fuel conservation mode late in the race.

The win also secured Whincup the Jason Richards Trophy for 2017.

Waters came home third after what was a quiet race from Turn 9, Lap 1 onwards. Craig Lowndes was next, while Fabian Coulthard kept his faint title hopes alive with a solid fifth in his repaired Penske Ford.

He's now 176 points behind Whincup with 300 up for grabs in Newcastle.

Mostert needed a huge recovery drive to keep his own mathematical title chances alive, storming by the likes of Michael Caruso, Scott Pye, James Moffat, and Jason Bright inside the last 15 laps to come home seventh – a result that leaves him 258 points off the leader heading to Newcastle.

Shane van Gisbergen is now all but out of contention for the title after a horrid race.

The Kiwi was running well inside the Top 10 when he ploughed into the back of Tim Slade's BJR Commodore as the pair came into pitlane on Lap 16.

The costly error took 14 laps to fix, van Gisbergen ultimately coming home 24th. He now needs a gain of 276 points – a some sort of minor miracle – to defend his Supercars