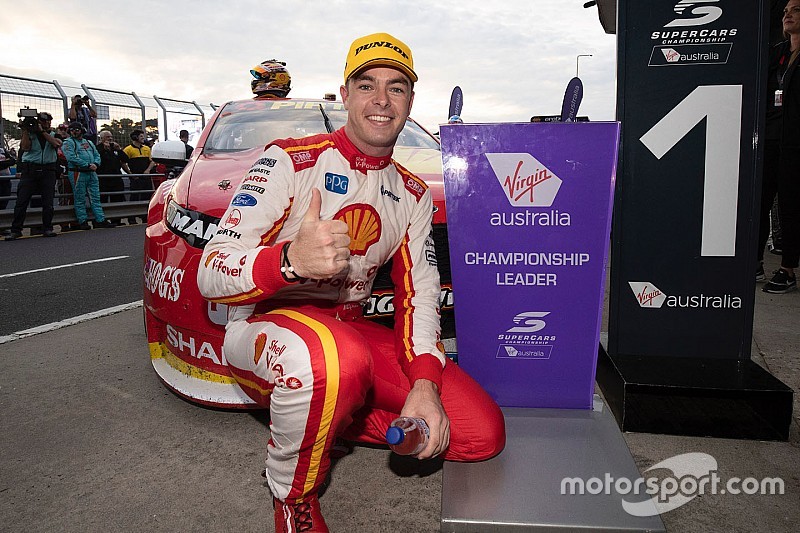 It was Whincup that got the best of the start, he and polesitter McLaughlin running side-by-side for several corners on the first lap before the Red Bull Holden eased into the lead.

From there he was able to slowly build a small gap over McLaughlin across the first stint, getting as much as 1.2s ahead around the 10-lap mark, before McLaughlin reeled it back to within a second a few laps later.

From Lap 14 onwards McLaughlin started to close in on the leading Holden, cutting the gap down to 0.3s over the next three laps. The leading pair then pitted nose-to-tail on Lap 17, Whincup just holding off McLaughlin to retain the effective lead.

The second stint was much like the first. Whincup made early gains to stretch the gap to a little over a second, before McLaughlin pulled it back to 0.3s by Lap 25.

That gap held steady until Lap 31, when once again the pair dived into the lane at the same time. Again Whincup held on, setting up a straight fight for the final 26 laps.

This time McLaughlin didn't let Whincup get away in the early part of the stint, running within a couple of tenths of the leader as the pair scrapped for control of the race.

On Lap 41 McLaughlin made his move, slipping up the inside of Whincup through Southern Loop to grab the lead. By the end of that same lap the gap was already 0.7s.

From there McLaughlin was able to ease his way to a 0.8s victory over Whincup, as well as a one-point championship lead.

"I was working on him for ages," said McLaughlin. "I needed to get close through Turn 1, I was good there. His thing is so fast down the straight, even in the tow he was pulling away from me! Anyway the thing is all good and we had a lot of fun.

"I think the battle between Shell V Power Racing and Red Bull its fantastic. I'me glad to be a part of it, I always have great battles with Jamie."

Rick Kelly finished an impressive third in his 500th Supercars race, the Nissan driver using a short-fill at his first stint to make some track position before impressively holding on to the final spot on the podium through the second round of stops.

"It was unbelievable," said Kelly.

"We had a tough couple of sessions yesterday, and then the car was ace this morning and it was unbelievable in the race. That last stint we had to really push hard and make sure we came out in that spot."

Shane van Gisbergen finished fourth, despite battling power steering problems throughout the race. The issue was bad enough that the team even looked at switching his steering wheel to a significantly larger diameter unit at the second stop, however van Gisbergen made a last-minute decision to fight on with the standard wheel for the final stint.

Craig Lowndes finished fifth, but had been in contention for third with a couple of laps to go. The veteran was allowed pass teammate van Gisbergen to have a crack at Kelly, before letting the struggling Kiwi back past on the last lap when he couldn't get the job done on the Nissan.

In stark contrast to last year's Phillip Island races, there was only a single tyre failure this time around. Michael Caruso was the unlucky driver to lose a Dunlop, his right-rear letting go on Lap 27 after he'd fought his way from the back of the grid to 10th on the road. He ended up finishing 18th.