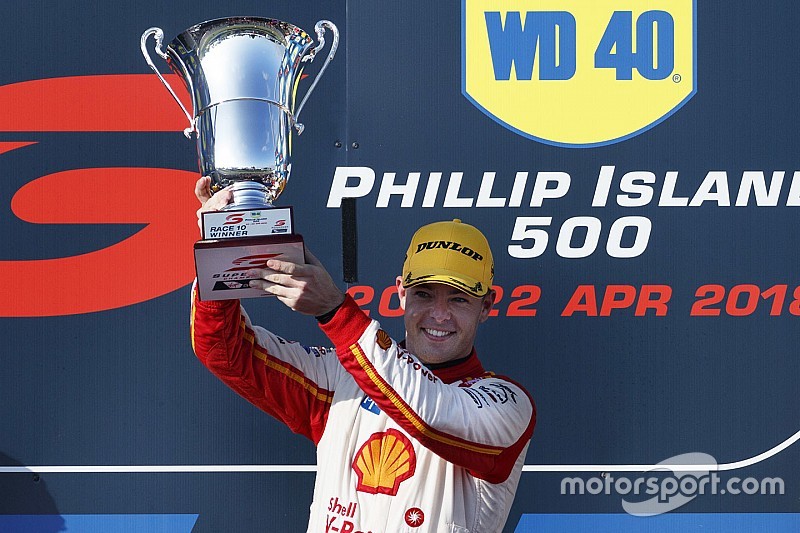 Scott McLaughlin made it a perfect 300 points at Phillip Island with an impressive second Supercars race win of the weekend.

McLaughlin led the very early stages of the race after starting from pole, but a Lap 8 Safety Car – called when James Courtney's car rolled to a halt at pit entry – didn't work out well for the Penske driver. With the entire field diving into the pits, McLaughlin was shuffled back to fourth after having to wait for traffic to clear as he exited his bay after the stop.

That handed the lead to Rick Kelly, who, like on Saturday, went for a short fill on his first stop to gain track position. As the second stint wore on the Nissan driver slowly edged away from David Reynolds, while McLaughlin sat patiently behind Michael Caruso in fourth.

Kelly's lead got up over three seconds before the second round of stops started, McLaughlin the first to make his second service from fourth place on Lap 27. Reynolds pitted a lap later, emerging side-by-side with McLaughlin before the pair staged an impressive battle over the next half a lap, Reynolds just managing to hold the Penske Ford off.

That quickly became a battle for the effective lead, Kelly pitting on Lap 29 and dropping back to third thanks to needing to take on more fuel. And it didn't take long for McLaughlin to grab back control of the race either, the Kiwi sneaking past Reynolds at Southern Loop on Lap 30 in a carbon copy of the move he pulled on Jamie Whincup on Saturday.

From there he was able to cruise to a second win of the weekend ahead of Reynolds, and a 60-point championship lead.

"I’ve had an awesome rocketship all weekend,” said McLaughlin.

“We had to fight a bit there. [Engineer] Ludo [Lacroix] said to back off just that lap and I said ‘give me one more lap and we’ll try and get past him’ and we did.

“Everyone knows I need to be consistent all year to be able to get it [the championship] done, which we didn’t do last year, and today was a good start.”

Kelly celebrated his 501st race start with a second podium for the weekend, but it didn't come easy. Having been shuffled back to third at the start of the third stint after that longer second stop, he then found himself under fire from Fabian Coulthard in the closing stages.

The Nissan driver did just enough to hang on to third, the gap between the pair just over a second at the finish.

"We were so excited to be on the podium yesterday, but to finish third today we’re a little flat because we led the race and pulled away from the field in the middle stint, but couldn’t pit as early as those guys with the fuel we had on board,” said Kelly.

“But a double podium for us is very exciting. It’s an incredible feeling for us. We don’t have some of the resources those guys have got but we’re doing our best.”

Caruso slipped back to fifth, having made a longer second stop like teammate Kelly.

Shane van Gisbergen finished sixth, having run an alternative tyre strategy with a second stop on Lap 36. That meant plenty of car speed in the closing stages of the race, which meant he could breeze past teammates Jamie Whincup and Craig Lowndes.

Van Gisbergen and Lowndes did have a minor run-in while scrapping over that sixth spot, the veteran ending up off the road after a tap from the Kiwi with three laps to go. Van Gisbergen let Lowndes back through, before getting the job done cleanly several corners later.

That meant Lowndes was classified seventh, a spot clear of Chaz Mostert.

Jamie Whincup endured a tough race, managing just ninth. Between yesterday's post-race penalties and today's lack of pace, Whincup has dropped down to fifth in the points, 142 off leader McLaughlin.

Reynolds is now second in the standings, with van Gisbergen and Lowndes third and fourth respectively.