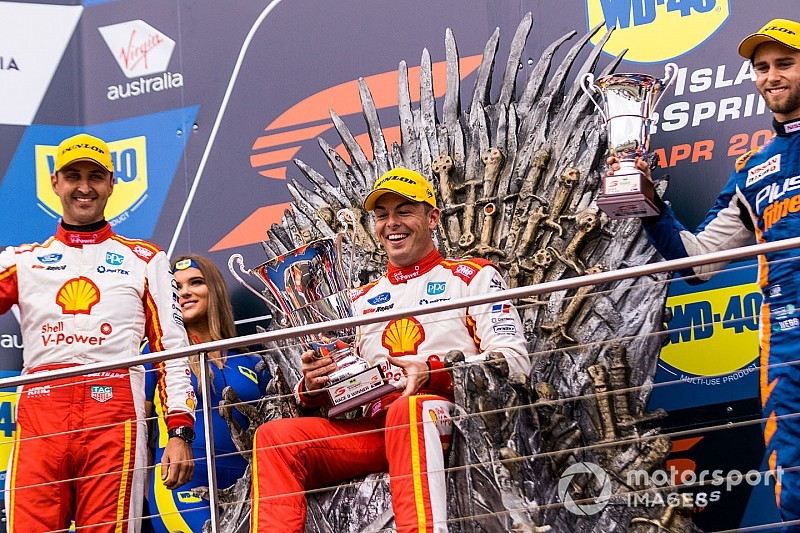 Scott McLaughlin scored yet another victory in Race 9 at Phillip Island, further expanding his championship lead.

McLaughlin took the checkered flag for the seventh time in just nine races this season, opening up his championship lead to 136 points.

It was also a DJR Team Penske 1-2 with Fabian Coulthard placing 2nd, crossing the line 1.2 seconds back of his teammate.

"Unreal. It's great for the team 1-2. We just controlled the race from the start so it's awesome," said McLaughlin, who got to sit upon the Iron Throne in a unique podium celebration.

However, both he and his teammate will undergo a post-race investigation for a possible pit lane infringement.

McLaughlin was in control from the get-go of the race until pit stops on Lap 6 of the 27-lapper.

As stops cycled through, Coulthard rejoined behind McLaughlin but in front of Heimgartner, who was able to jump Rick Kelly for the spot.

There was plenty of drama back in the pack with Tim Slade and James Courtney suffering right front tire failures and some fender damage.

Jamie Whincup's bad weekend got worse as he left the pits with the right front tightened, which left the car around a tight left-hander. Whincup stopped his car to the side of the circuit, forcing the safety car to be deployed on Lap 14.

"We just didn’t want to cause more damage to it," said the team's Mark Dutton.

Later, Cam Waters was forced to exit the race after wheel-to-wheel contact with Shane van Gisbergen.

"Just kind of hit wheels awkwardly ... absolutely gutted," he said. "I love racing hard and I don't really think anyone is to blame. Shit happens."

Andre Heimgartner took the final spot on the podium in the Nissan. David Reynolds had a sensation drive from 12th on the grid to fourth, moving up to third in the championship standings. Chaz Mostert rounded out the top-five.