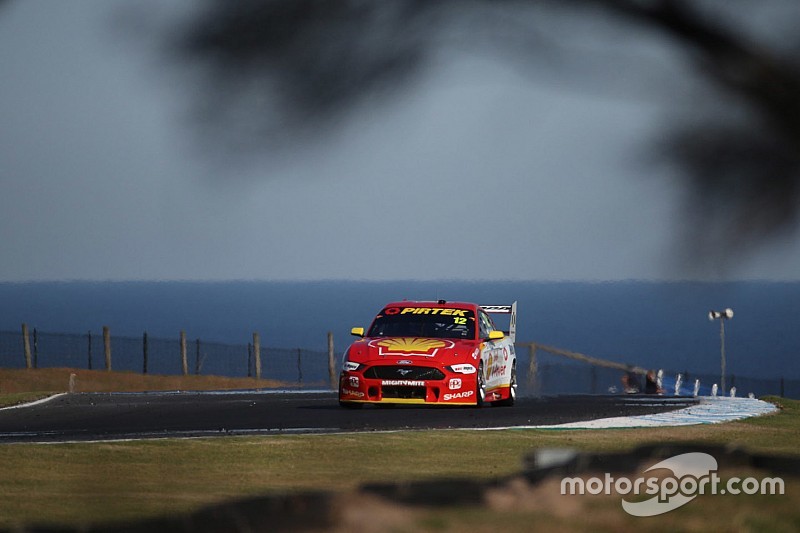 Mustangs dominated the session, all six in the field set to sit out Q1 tomorrow after landing in the Top 10.

There is a handful of top Holden drivers who will need to go through all three segments of qualifying, however, with Whincup, David Reynolds and Mark Winterbottom all falling short of the cut-off.

Tickford's Chaz Mostert made a rapid start to the session, going quickest with a 1m31.668s on his first flyer before improving to a 1m31.658s on his second.

Moments later Nick Percat moved to top spot thanks to a 1m31579s, before being replaced by Reynolds' 1m31.554s right on the 10-minute mark, the Erebus star then lowering the benchmark to a 1m31.491s on his next lap.

With 12 minutes gone McLaughlin made his first appearance in P1, the reigning series champ storming to the top with a 1m31.367s.

There was a brief pause in proceedings with 10 minutes to go, wild geese wandering onto the track sparking a red flag for the second time today.

At that point there were some big names facing Q1, with Winterbottom, Whincup and Shane van Gisbergen all well outside the Top 10.

Whincup swiftly did his best to rectify that, going quickest with a 1m31.237s with six minutes to go.

Then, with a couple of minutes to go the green tyre runs started, McLaughlin first across the line with a 1m30.186s.

He was immediately beaten by teammate Fabian Coulthard's 1m30.180s, leaving the Penske pair more than a second clear of the rest of the field.

That gap did shrink as the rest of the field finished their green tyre runs, Cam Waters getting to within three tenths, but nobody could topple the two Penske drivers.

“It’s hard to know really where you’re at when the Triple Eight Holdens are not there. We’ll go through everything tonight and see if we can make it better.

“This is one of those tracks where if you find a little bit you find a lot. I’m not 100 per cent happy, I don’t think you ever are."

Waters' lap made it a Mustang top three, Rick Kelly the best of the non-Fords with the fourth quickest time in his Nissan.

Will Davison and Lee Holdsworth made it five Mustangs in the top six, while second-year young guns Anton De Pasquale and Todd Hazelwood were, somewhat surprisingly, the best of the Holdens in seventh and eighth.

Chaz Mostert ensured all six Mustangs will miss Q1 tomorrow, while van Gisbergen suck into the Top 10 on his final lap.

Van Gisbergen's late improvement was bad news for teammate Whincup, who got knocked down to 11th as a result.

“Disappointed. We wanted to be in the 10, we pushed pretty hard,” said the seven-time series champ.

“I’m only a hundredth behind my teammate, so that sucks, he just knocked me out at the end there. That’s the way it goes, we’ll keep fighting on. We’ve got Todd Hazelwood up there in my car from last year.

“Those guys are doing a better job than we are at the moment so we’ll have to pull our finger out.”

Reynolds and Winterbottom will also need to go the long way in qualifying, ending up just 14th and 18th quickest respectively.