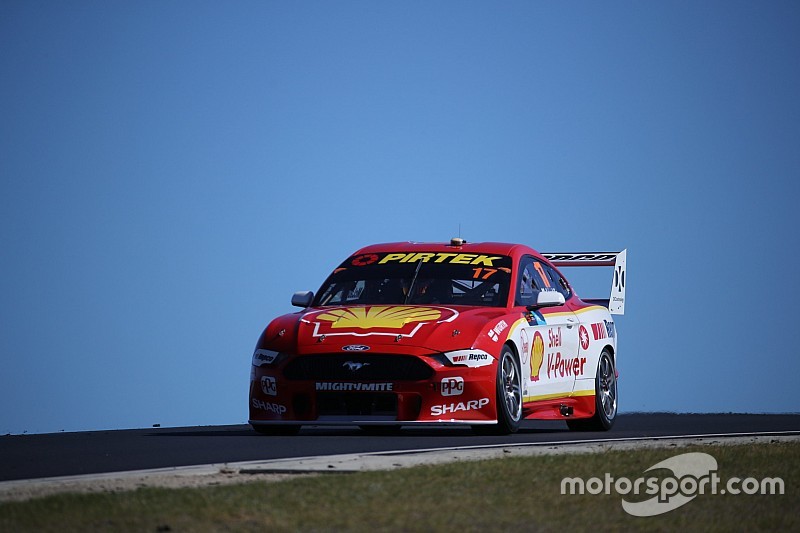 McLaughlin and Chaz Mostert staged an impressive exchange for the fastest-ever lap on the newly-resurfaced track, the reigning champion coming out on top by over a tenth with a devastating final run.

Thursday practice pacesetter Whincup, however, will need to go the long way in qualifying this afternoon, after a kerb strike on his crucial final run cost him his best time and left him well outside the Top 10.

It took just seven minutes for yesterday's new lap record to be beaten, McLaughlin lowering the outright benchmark with a 53.344s.

There was little movement near the top through the middle part of the session, before Fabian Coulthard made it a Penske one-two with seven minutes to go thanks to a 53.416s.

The final three minutes saw a flurry of activity in the Top 10, as drivers looked to bank a direct spot in Q2 later this afternoon.

At the very top of the time sheets McLaughlin and Mostert traded quickest times during the happy hour, the Tickford driver grabbing top spot with a 53.242s before McLaughlin reset the lap record 53.125s on his final run.

“The car is so good to drive around this place,” said points leader McLaughlin. “It’s a great track, we’d just never had any grip. Now we’ve got grip, we’re just throwing it in, it’s bloody awesome.”

The two Mustangs were followed by Nick Percat, somewhat of a surprise given the Brad Jones Racing driver was just 23rd in yesterday evening's practice.

Coulthard slipped back to fourth after only making a small gain on his final run, as Will Davison and David Reynolds booked their Q2 berths with sixth and seventh.

Two Nissans were next, Rick Kelly and Andre Heimgartner finishing ahead of Lee Holdsworth.

There was almost three Nissans in the Top 10, Garry Jacobson only missing out thanks to a last-gasp effort from Shane van Gisbergen to grab 10th spot and relegate the rookie to 11th.

Van Gisbergen's teammate Whincup didn't manage to salvage an automatic Q2 slot, thanks a kerb strike at the final corner on a lap that would have put him comfortably in the Top 10.

Instead he was left stranded down in 18th, which means he'll need to go through Q1 in the fight for pole.

“The car is good, I must have just clipped the sensor, which here is two laps. You get the lap disqualified and the next one. It’s all over,” said Whincup.

“The pressures go through the roof [after that]. You get a second chance here if you don’t quite get it right in the first one, but you don’t get a third or a fourth.

“It is what it is. We’re in Q1, but the car is much faster, but that’s the biggest thing. If you’ve got pace, you can dig your way out of it.”