Two qualifying sessions and two 100km races will round out the Queensland Raceway event tomorrow.

James Moffat has taken another top 10 result for Nissan Motorsport at Queensland Raceway today, storming through to finish 10th in the opening V8 Supercars race at the Ipswich circuit.

Moffat qualified 16th and moved up to 14th in the opening part of the 60/60 Super Sprint race format. 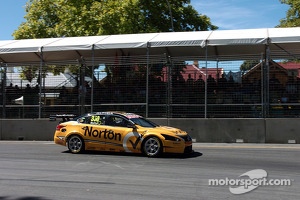 Kelly was never far behind Moffat, and in fact passed him at one point. The Jack Daniel’s Racing driver eventually finished 13th, retaining his 12th place in the championship fight.

Todd was the fastest Nissan driver in qualifying, claiming 14th place and raced competitively in the pack.

Michael Caruso had a day he’d rather forget after being the innocent victim in a first lap crash during Part B of today’s race.

Caruso was nudged off in a clash between Dean Fiore and Lee Holdsworth, causing the rear wing and boot of his Norton Nissan to receive extensive damage.

Two qualifying sessions and two 100km races will round out the Queensland Raceway event tomorrow.

James Moffat (#360 Norton Hornets Nissan Altima - Race 22 qualifying: 16th / Race 22 result: 10th): “I’m definitely pleased with the result. It was a solid day for us. Anytime you sneak into the top 10 in this category, it’s pretty good,” said James Moffat.

“Considering what we’re dealing with the motor’s deficiencies, the result was about as good as we could ask for.

“The Altima is handling very well. I’m happy with the balance. It’s strong under brakes, but in qualifying and race conditions, we just give up too much on the straights which makes it difficult to set up passes.

“The car looked after its tyres really well. I was driving it as hard as I could and our lap times were pretty competitive.

“I’m looking forward to tomorrow’s 100km races. I think that will suit our car even more in the later half of the races. We just need to concentrate on qualifying as far up the front as we can.”

Rick Kelly (#15 Jack Daniel’s Nissan Altima - Race 22 qualifying: 22nd / Race 22 result: 13th): “It was a lot of fun out there, the first half it was all pretty subdued and everyone was just cruising around and we managed to get past a few after we lost a few at the start, so that was good,” Rick Kelly said.

“We made up three spots to start with in the second half and unfortunately I think everyone threw that attitude out the window in the break and people when crazy everywhere, which was good and it made good racing.

“I don’t think there was anything crazy going on, so we managed to sneak up to the back of the top 10 and then as time went on, we just couldn’t look after our tyres as good as is the first half of the race so we ended up back in 13th, but we’ve got some good data for tomorrow with a solid race car.”

Todd Kelly (#7 Jack Daniel’s Nissan Altima - Race 22 qualifying: 14th / Race 22 result: 15th): “From a good qualifying run that just went pear shaped through the race. I’m trying to do the right thing out there all the time and the standard of driving is just average with some of these blokes,” Todd Kelly said.

“Again just being run off the track a few times and nerfed off and lost positions to end up where we did, so it’s a shame, because something needs to be done about it; the cars are definitely good enough to be up there.”

Michael Caruso (#36 Norton Hornets Nissan Altima - Race 22 qualifying: 28th / Race 22 result: 25th): “Unfortunately, we had a poor qualifying session, but we changed the set-up for the race and the car was good enough to move up eight spots in the first part of the race,” said Michael Caruso.

“We were happy with the speed, but at the start of the Part B race, I was taken out and there is a fair bit of damage for the boys to look at.

“We get another chance tomorrow in qualifying and the races to redeem ourselves.”

Whincup the master - from devastation to elation at Ipswich