Nissan wants to take a win in New Zealand

Nissan Motorsport is looking to continue its push towards the front of the V8 Supercars field at the championship’s one-and-only flyaway event for 2014 at Pukekohe Park, New Zealand, this weekend.

After some fluctuating fortunes in the opening three events, the factory team is keen to get all four of its Nissan Altimas figuring inside the top 10.

Grand Prix podium finisher Michael Caruso currently sits in 14th in the championship – the highest of the Nissan quartet.

The other three drivers – James Moffat, Rick Kelly and Todd Kelly – are not that far behind Caruso’s Norton Nissan, and all four drivers are just a few good results away from returning to championship contention.

The weekend’s schedule is a unique format, with Friday hosting just one practice session ahead of qualifying and a 100km race.

A total of 500km of racing over three days, made up by Friday's 100km affair, a pair of 100km races on Saturday, and a final 200km encounter on Sunday.

“I enjoy the limited track time. As a category and as drivers, we’re at a high level, so there’s no reason why we shouldn’t be able to roll them out of the truck or plane and be straight on top of it,” said Michael Caruso.

“I think it’s going to reward the teams that have done their home work.

“If you have everything in order prior to practice, you won’t need to build up to the pace – you’ll be on it from the word go.

“There is barely time between practice and qualifying as well. You’ll be fueling up, changing tyres and sending us back out.

“This is the way of the future, as far as I’m concerned, and it reminds me of racing in go-karts. We’d have a five-minute carbie session and then you’re straight into the racing!

“Most of all, the Friday fans will be the winners. They want to see the cars out there competing for keeps. I’m looking forward to it.” 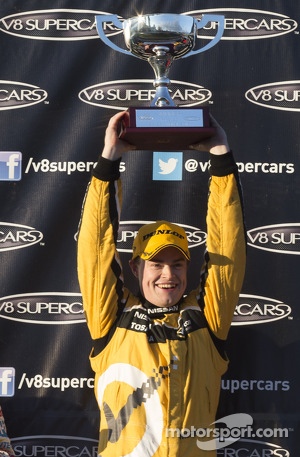 “The new format is going to put quite a lot of pressure on you and the team to make sure everything is right,” said James Moffat.

“I’m a big supporter of the two-day formats, so if we’re racing in this format in New Zealand, I don’t know why we can’t do it at most other venues.

“We’ve already had the reduced practice time at Symmons Plains and Winton, which has taken some time to get used to, but it’s the same for everyone so you have to deal with it.

“I think it will advantage those who have raced at Pukekohe before, because some people haven’t and they’ll be very green.

“It also going to be unique racing on ANZAC Day. I’ve never done that before and that will be cool. We’re all here today living the lives we do because of the ANZACs and those who sacrificed so much all those years ago. It’s a landmark day in Australia and New Zealand and this will be a unique way to celebrate.”

"It's quite a challenging track, I'm a little bit frustrated still from Winton, so I can't wait to get back in the car and get it back up to the front," said Rick Kelly.

"Last year when we went to New Zealand we weren't too bad, and we were still trying to learn the new car, and this year our expectations are a little higher than they were this time last year.

"The track itself is a very exciting one, it really does provide absolutely everything; it has one of the slowest corners of the season, it has a couple of fast sweeping corners, like turn one and the last pair.

"Obviously there are a couple of new corners in the complex over the back of the circuit, which has a new and really high grip surface.

"From a setup point of view it's very difficult to get a car setup that favours all of those different elements, which is a really good challenge.

"Last year was the first time back there since 2007, and it provided a lot of very exciting racing.

"I'm just looking forward to it, we've visited Winton which is a challenging track inside the car with the tyres going off, and now we're off to a track that is a bit more exciting, and the only one we do in New Zealand as well."

"Racing at Pukekohe is always something you look forward to at the start of the year, the fans in New Zealand always embrace V8 Supercars, it's a big event on the calendar," said Todd Kelly.

"From a driver's perspective, the track packs in a lot of really interesting corners into quite a short lap. The run onto the pit straight is fairly wild, while the new chicane on the back straight adds another overtaking opportunity and another challenge when setting the car up.

"With the limited practice running, we'll have to unload the car and be right on the money, you won't have time to try a lot of different setups before qualifying and racing.

"As a team last year we had top-ten speed, so with a season of development under our belts, I'm confident we'll be in a strong position."