Nissan Motorsport will be looking to maximising the tyre life on their Nissan Altimas in the V8 Supercars event at Barbagallo Raceway in Perth this weekend.

The tough and tight 2.42km West Australian circuit is notorious for severe tyre wear, with team driver Todd Kelly suggesting that "tyre degradation" is likely to be the most used words in the V8 pitlane over the course of the event. 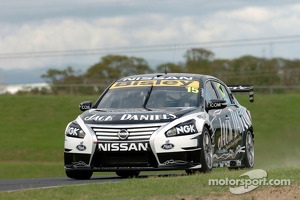 Each team will have 24 new soft compound tyres each for the event, to be used across the three races on the abrasive, sand lined track.

The event format returns to the 60/60 Super Sprint, first run at Symmons Plains in early April.

Race 10 of the championship will be run on Saturday (60/60), followed by two 100km races on Sunday (Races 11 and 12). The Perth circuit is a popular venue amongst the Nissan drivers, however, neither Todd Kelly, Rick Kelly, Michael Caruso or James Moffat have taken a race win at the circuit.

Todd Kelly was the most recent to enjoy success in the west, claiming a pole position and a podium finish in 2009.

Todd Kelly, #7 Jack Daniel's Racing Nissan Altima: "Those words 'tyre degradation' will come up a lot over the weekend. Probably more than anything else," said Todd Kelly.

"I think we'll have to go longer than we ever have on a soft set of tyres around Barbagallo. The race winner will be the one who has the best balanced car, the nicest on its tyres and the most patient and sensible driver. If you try and race hard, you'll run out of tyres after three laps. It will be a race of management.

"It's quite a unique circuit and very different to what we've driven on before.

"The track is very enjoyable to drive. You have to be very committed in places but patient in others.

"I'm looking forward to seeing exactly what the Altimas do at a completely different style of track. We've learnt so much so quickly and I can't wait to see where we stack up against the others."

Rick Kelly, #15 Jack Daniel's Racing Nissan Altima: "I'm very excited to head to Perth, as the past two race meetings have been on softs and hards and the tyre degradation has been nil. Barbagallo, as we've seen in the past, will be different," said Rick Kelly.

"Obviously with the rules in 2013, you don't have to pit unless you want to, so it will be interesting, particularly the Sunday race to see if people try and stick it out for the whole 100km races, or run the risk and pit for new rubber.

"For us in the Altimas, we're keen to get to a new event and new track. We knew we'd struggle in Tasmania, but to come out to Pukekohe and perform quite strong was very encouraging.

"We want to maintain and improve on some of that form. Pukekohe was the first time that I've felt really comfortable with the car and that Erik (Pender, engineer) and I have had a pretty good direction on set-up."

Michael Caruso, #36 Norton 360 Nissan Altima: "I really enjoy the Barbagallo circuit. We get fantastic support from everyone over there, so it's great to be welcomed so warmly from everyone," said Michael Caruso.

"It's a really good track technically. It's very difficult. One thing we all know is that it's a reminder of tyre degradation, and you're asking the car to do 50 laps, which is a long way on that track.

"It will be interesting to see how the Altimas go. They've obviously been handling well, and tyre life will be the key, so we'll see where we end up.

"Ultimately, our performance will be based on where we qualify. If we qualify strong, we'll have a great race package. I dare say that we'll move forward in the races because of our car. That's been a common trend over the past few races, which is a huge positive, because you don't want to get in your car and know it's going to be a handful."

James Moffat #360 Norton 360 Nissan Altima: "I always look forward to heading over to Perth. I've had a lot of good times there – I won in Formula Ford, had my first Carrera Cup podium. Not that that stuff is completely relevant to this weekend, but it has been a happy hunting ground for us," said James Moffat.

"It should be a great event. The 60/60 Super Sprint format is back. It created some exciting racing at Symmons Plains recently, so the rolling start for the second half of that will be interesting.

"We've just got to keep working on the car and make subtle improvements along the way. The weekend is going be a lot out tyre degradation and looking after your tyres on the soft tyres, especially in the two 100km races on Sunday."