The Nissan Motorsport team has had little time to rest as the V8 Supercars Championship heads to New Zealand for the ITM 400 Auckland at Pukekohe Park.

Having come straight off the boat from last weekend's event at Symmons Plains, Tasmania, the teams are continuing to preparing the cars at Avalon Airport in Victoria ahead of tonight's flight to Auckland, New Zealand.

All 28 V8 Supercars will then be freighted to the newly-refurbished circuit where teams will finalise their set-ups ahead of Friday's four practice sessions. 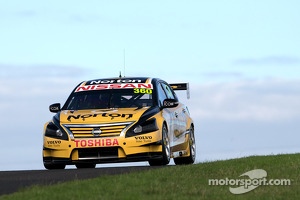 The event marks V8 Supercars' return to Pukekohe after spending the past five years at the Hamilton street course.

The return to Pukekohe comes with a $6.6 million upgrade to the facility, including a new chicane on the back straight that has increased the length of the track to 2.91km.

Nissan's driver quartet head to New Zealand with a mix of experience and success under their belts.

Jack Daniel's Nissan driver Rick Kelly was the last driver to win a race at the circuit, claiming the third race victory in 2007.

His brother and team-mate Todd is also a former winner on the circuit's old configuration, winning a race in 2002.

For the Norton 360 Nissan drivers of Michael Caruso and James Moffat, the event marks their first time at Pukekohe Park, although the pair have enjoyed success in New Zealand. Caruso claimed a podium finish at Hamilton in 2010, and a year later, Moffat picked up his maiden top 10 race finish.

Four practice sessions will be held on Friday, with qualifying, a top 10 shootout and two 100km races on Saturday. Sunday will see the cars compete in two qualifying sessions and two more 100km races.


"I can't wait to get to New Zealand and wheel the car out of the truck and get stuck into it because I've been really happy with where we've been with the car," Todd Kelly said.

"The car has been fantastic and there are a few good corners in New Zealand where hopefully the engine speed won't knock us around so much.

"I can't wait to get a good result, but first things first, we need to try and get enough engines to have four cars turn up to the airfreight, but I'm more than confident that won't be an issue and we'll be ready to go in New Zealand."


"I'm quite excited to head over to New Zealand, as much as the turnaround is tough with only one week, it's good for us to race every weekend, because we can carry the momentum from Tassie," Rick Kelly said.

"Heading into this weekend in New Zealand, it brings back fond memories because we were the last driver and engineer with Eric (Pender) and I, to win at Pukekohe back in 2007. It's going to be tough to produce the same result this year, but nevertheless it's a happy hunting ground for us, a track that we enjoy and a couple of changes there as well, which we can capitalise on.

"I think the track's going to suit us a little bit more than in Tasmania, so it's a chance for us to move forward and continue gathering points."

"It will be an interesting weekend for both (Michael) Caruso and I, given that we haven't raced there before," said Moffat.

"From what we've heard and seen, there's been a lot of money spent on the facility with an extension to the track, so that will be good for us in that there's something new for everyone.

"It's great for our sport to go to New Zealand. I've obviously raced over there at Hamilton a couple of times and I had my first top 10 finish in 2011. We all love going to New Zealand, and it's another chance to get the Altima onto a different style of circuit.

"We'll just have to wait and see how the track suits our car."

"I haven't raced at Pukekohe before so it will be a totally new experience for myself," said Caruso.

"I haven't had a proper look at the track yet. I like to focus on the round at hand, and because we had back-to-back events, Symmons Plains was the first so I had put my energies into that.

"Since Symmons Plains, I've been having a look at Pukekohe, and obviously they've changed the layout, so there'll be a bit for everyone to learn.

"I'm looking forward to going over there. I enjoy going to New Zealand and I've had some good results at Hamilton. It will be good to see how many Nissan fans we have and I'm sure they'll be excited to see and hear our cars. Hopefully we can get to the pointy end of the field."