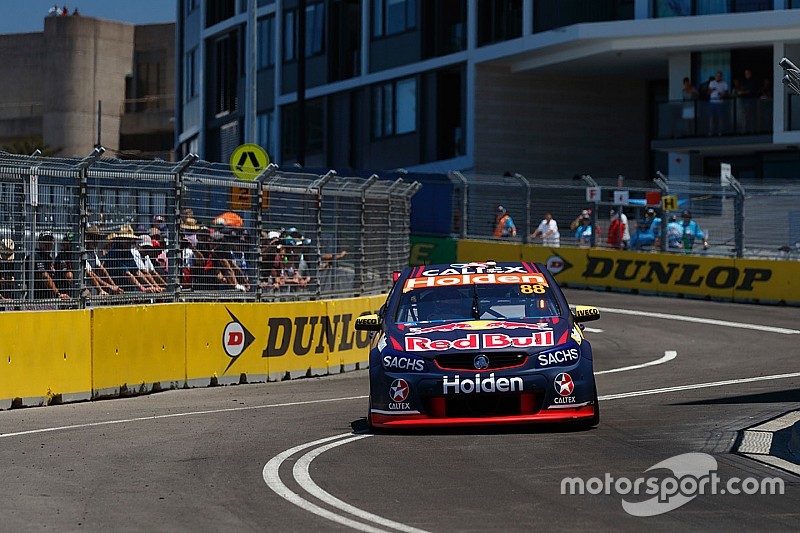 Jamie Whincup made history on the streets of Newcastle, topping the opening practice session on the brand new circuit to kick off the Supercars finale weekend.

The points leader went for a green set of tyres at the end of the session to jump from 11th to first with a 1m10.157s, leaving him more than three-tenths clear of the field.

While it's a history-making lap in terms of topping the first ever session on the brand new circuit, Whincup said afterwards he's not expecting the time to look quite as impressive after this afternoon's second practice session.

"Everyone will be in the nines shortly, so we don't have to worry about that time," said the Triple Eight driver.

"The car is reasonable. The track is a fair bit different to what we predicted. I thought there would be a bit more flow, but it's quite stop-start.

"That's all part of the character of a street track, it's going to be a challenge to get it right. I'm enjoying the challenge, you're heart is in your mouth the whole way around."

HSV Racing driver Scott Pye finished up second fastest, like Whincup making late gains to spring up the timesheet with a 1m10.532s.

That knocked Whincup's teammate Shane van Gisbergen back to third, the Kiwi having gone fastest seven minutes from the end with his 1m10.612s

Michael Caruso was the best-placed Nissan in fourth thanks to his 1m10.880s, beating Tim Slade and Will Davison, both of whom improved late and knocked title contender Scott McLaughlin down to seventh.

Like McLaughlin, Chaz Mostert failed to improve late in the session and was bumped down to eighth, ahead of Rick Kelly and David Reynolds.

Fabian Coulthard, a title contender in a mathematical sense, was just 20th fastest.