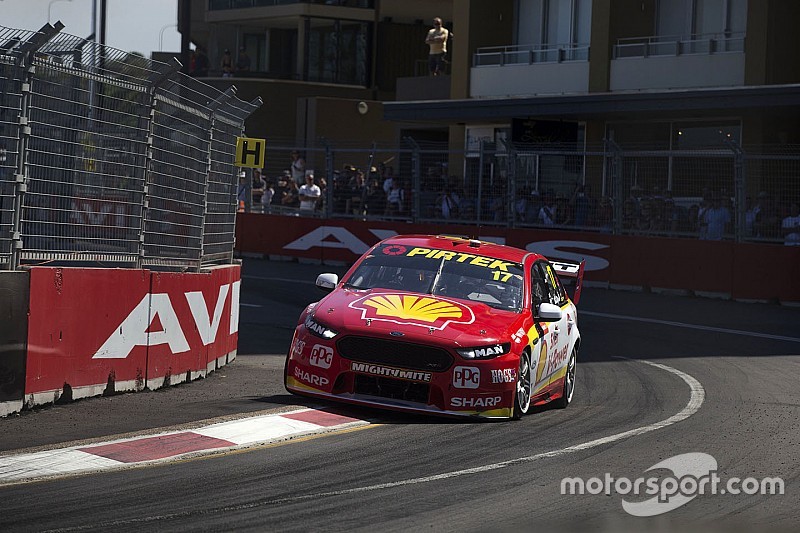 Scott McLaughlin surged to the lead of the Supercars standings with a victory in the penultimate race of the season at Newcastle, while Jamie Whincup’s title hopes took a big blow through contact on lap 1.

McLaughlin got away cleanly from pole position, but there was drama further down the field. Shane van Gisbergen briefly lost third place to Michael Caruso, but dived down the inside of the Australian at Turn 2 to retake the spot

Van Gisbergen’s move opened the door for teammate Whincup, who had only qualified fifth for the race. The six-time Supercars champion was able to get his nose ahead of Caruso, but the two drivers made contact as they exited the corner.

While the #23 Nissan driver escaped the incident without significant damage to the car, Whincup’s Red Bull Holden suffered from a broken steering wheel, forcing him to limp back to the pits.

The safety car was immediately brought out, reducing the pain for Whincup who was set for lengthy repairs in the garage. He eventually spent 13 laps in the pits, emerging at the back of the pack in 24th.

At the front of the field, Tim Slade and Craig Lowndes took over the leading two spots, being the only frontrunners not to stop under SC. Van Gisbergen slotted in in third position after getting the jump on McLaughlin.

The status quo remained after the second SC - deployed on lap 34 after Cameron McConville ended up in the barrier due to contact with James Courtney - with changes only beginning from the third round of pitstops.

David Reynolds claimed the effective lead of the race by undercutting his rivals, while McLaughlin got the jump on van Gisbergen by pitting two laps later than the Kiwi.

With race-long rival van Gisbergen behind, McLaughlin started hammering down Reynolds for overall honours. On lap 71, the latter made a costly mistake at the hairpin, allowing McLaughlin to move up and take the lead.

Immediately afterwards James Moffat was pushed into the barriers by Mark Winterbottom, bringing out the third safety car of the race.

This set-up a time-limited showdown till the chequered flag, with McLaughlin nailing the restart to prevent any chances of an attack into turn 1.

However, Reynolds wasn’t in an equally luxurious position and soon came under pressure from van Gisbergen. The Triple Eight driver lunged downside the inside of Reynolds, launching the Australian into the tyre barriers.

Both drivers were able to continue the race, but lost several positions over the following few laps due to the momentum lost in the incident. Van Gisbergen was also handed a 15-second time penalty, dropping him further down the field.

Slade, who didn’t pit during the first safety car, finished third, securing his first podium since the Surfers Paradise round.

Lee Holdsworth finished fourth after starting down in 18th position, while Reynolds was eventually classified sixth after the aforementioned contact with van Gisbergen.

Chaz Mostert and Scott Pye finished a second apart in sixth and seventh places respectively, while Nick Percat and Alex Davison were classified eighth and ninth, separated by just four tenths of a second. Rick Kelly completed the top 10.

Van Gisbergen was eventually classified 16th in the timesheets after taking his penalty into account, while Whincup would up 21st after his lap 1 troubles.

The six-time Supercars champion has fallen 78 points behind McLaughlin in the standings, with 150 on offer in the final race on Sunday.