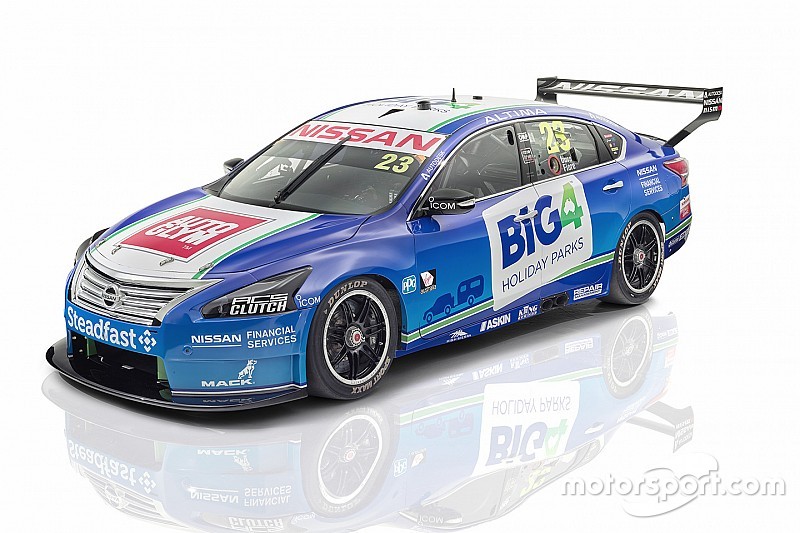 Nissan Motorsport and HSV Racing have both rolled out fresh liveries ahead of this week’s Bathurst 1000.

Having run retro liveries at the Sandown 500 last month, Nissan and HSV Racing have both elected to not return to the standard livery for one of its respective cars.

Both the deal and the livery are a one-off, and play on the blue that the car ran in its Calsonic retro look at Sandown.

There’s a practical element to the deal as well, with Caruso and Fiore set to incorporate a number of Big4 parks into the team’s famous annual Bathurst road trip.

“Driving up to Bathurst is an important part of our race preparation,” said Caruso.

“The road trip gives you time to settle your thoughts and appreciate what you’re about to embark upon.

“Todd and Rick always enjoyed the drive. To be able to do this with Deano, and stop at some Big4 holiday parks along the way, is something pretty special.

The new look features less of the bright orange on the bottom half of the car, shifting the focus to the matte black.

The livery will stay on the car for the remainder of the season.

“It’s certainly a great looking car, one that really pops and shines, especially in the sunlight,” said General Manager of Motorsport Mathew Nilsson.

“Having a new livery for the biggest race of the year is always special, but it’s also great to be able to have it on the car for the remaining events in 2017.

"The business is happy to bring this concept to life for the team at Boost Mobile for Bathurst, especially after the success the team had with our Retro Round liveries at Sandown."

The team’s other Commodore, to be shared by regular driver Scott Pye and co-driver Warren Luff at Bathurst, will carry over the Holden Racing Team-inspired retro livery that it debuted at Sandown.