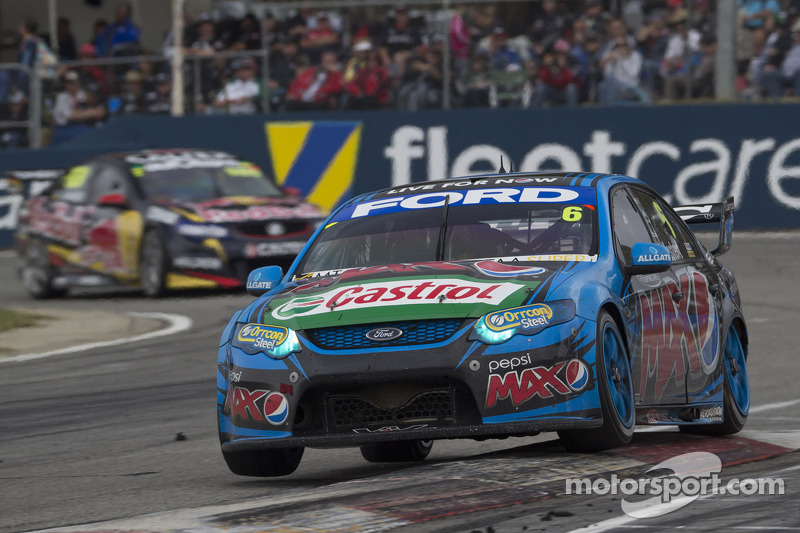 Chaz Moster held off an assault by Craig Lowndes to win his first race of 2014.

The V8 Supercar season is 16 races old and we've already seen ten different winners. Ford factory driver Chaz Mostert has joined that list with his triumph in the third race at Barbahallo Raceway this weekend.

Lowndes jumped ahead on the start, but the blue ovals were in hot pursuit directly behind. Early in the race, Jack Perkins and Dale Wood got into it and contact was made on more than one occasion. At one point, they were even running each other off the road. And what were they driving so aggressively for you ask? Last place. That's V8 Supercar racing for ya.

After enjoying his best starting position of the year, Robert Dahlgren became the unofficial rag doll of the field. As they passed him on every side and at every corner, his rivals did not hesitate to knock him out of the way, door-slam their way by him, and nudge his Volvo off the track.

His teammate Scott McLaughlin didn't fair much better, needing his door taped up after dents he received in battle caused it to open. Tim Slade busted his steering after contact with Scotty halfway through the race as well.

On lap 18, Lee Holdsworth suffered a left rear tire failure, and he would not be the last to suffer such a fate. A few laps later, his Erebus teammate Will Davison limped back to the pit lane with the same issue. Later on, both HRT cars had their races marred by sudden left rear tire punctures. James Courtney was running in fourth and in contention for a podium result when it happened to him.

Mostert passed Jason Bright (who was on a three-stop strategy) for the lead on lap 43 of 83 and never looked back. Okay, well maybe he did look back a few times because the Red Bull of Craig Lowndes was breathing down his next for the good part of 25 laps following the pass on Bright.

After negotiating some heavy lap traffic, Mostert was able to cruise to the victory and claim his maiden victory with his new team. The top ten finishers were Mostert, Lowndes, Winterbottom, Whincup, Coulthard, Bright, Wall, Moffat, Reynolds, and Caruso.

Todd the hard charger for Jack Daniel's Racing in Perth

Bright Bounces Back in Perth