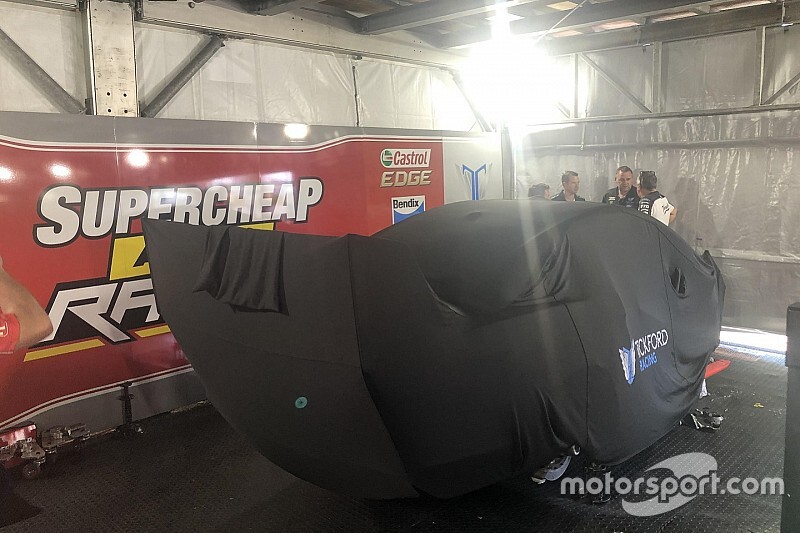 Chaz Mostert and James Moffat will take no further part in this weekend's Gold Coast 600, their Tickford Mustang a write-off after Mostert's heaving Shootout crash.

Having taken provisional pole, Mostert's Shootout challenge unravelled when he clipped the inside wall at Turn 11, and was subsequently fired heavily into the outside wall.

Following an assessment of the damage, Tickford has confirmed that the chassis has been written off, ruling Mostert and Moffat out of the rest of the weekend's action.

“The chassis is a write-off,” said Tickford boss Tim Edwards.

“The engine is not even connected to the car anymore, it’s sheared the engine off and shoved it backwards through the car.

“The chassis is a complete write-off, as is most of the stuff that’s bolted to it.”

It will also means Mostert will need a fresh chassis for the Sandown and Newcastle rounds, the spare car used as Thomas Randle's wildcard entry at The Bend the likeliest solution.

Mostert, who was given the all-clear from medical staff after the crash, admitted it was all started by a small mistake.

“A little bit sore from that one, but overall checked out pretty good," he said.

"I just made the smallest mistake and it bites you.

"There’s no excuse. We were nowhere in the middle sector, I shouldn’t have really made that mistake, but I just really struggled with the feel of the car under me to start with.

"In saying that it’s our job to drive around those things and try and do a time. I just failed today, it’s pretty simple."