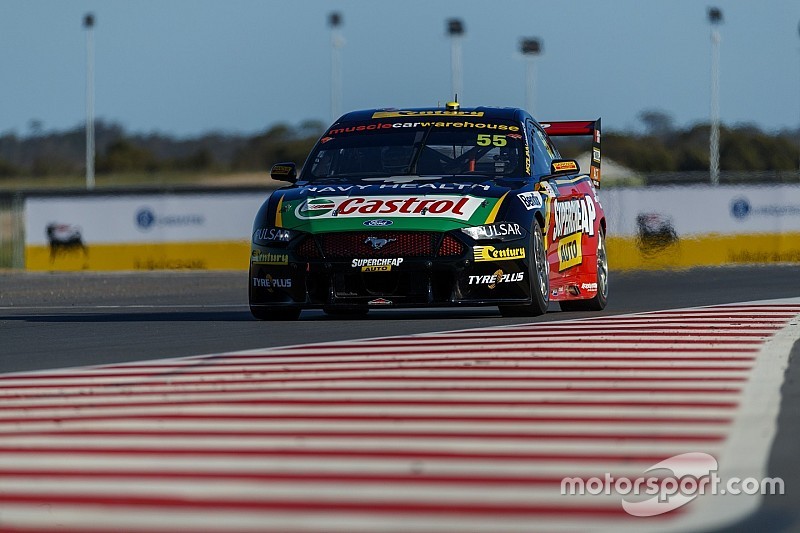 A missed opportunity to beat an in-form Scott McLaughlin at The Bend today is somewhat of a "bitter pill" for Tickford, according to team boss Tim Edwards.

Tickford star Chaz Mostert charged to a sensational pole at McLaughlin's expense in qualifying, lowering the outright lap record as he relegated the Penske Ford to the outside of the front row.

While it was McLaughlin that got the better of the starts for the 120-kilometre race, Mostert was still able to shadow Supercars' form man for the majority of the race.

It was only in the closing laps that the gap ballooned out from around the 1s mark, when Mostert called off his charge to save fuel.

While it was a hugely promising showing from Tickford and Mostert, team boss Edwards reckons he's conflicted over the result.

He says it was a golden opportunity to topple the dominant McLaughlin/Penske combo, and that he can't help wonder what might have been had Mostert had won the drag race to Turn 1.

"Look, to be honest I'm disappointed," he said.

"We qualified on pole and I wanted to win the race. So to finish second feels like a bitter pill, really.

"We know that if you can just get in front of Scott you've got half a chance of beating him. But when he qualifies on pole and he's got clear track in front of him, he can drive the way he wants to drive and he wins the race.

"Had Chaz got him off the line, we might have seen a different result today. We tried. [Engineer] Adam [Deborre] had a crack and brought him in, tried to do the undercut and it didn't quite work.

"But it's still a fantastic result."

Edwards added that if there had been a genuine chance of passing McLaughlin late in the race, Mostert would have had enough fuel to ignore a warning light, continue to attack, and still make the finish.

"He would have been fine," he said. "He did another lap after the chequered flag.

"All of our cars got the low-fuel alarm on the last lap, so Adam just said 'cruise home, you've got 24 seconds to the car behind'.

"You always want to run it into the pot, and on these Saturday races you're always tight on fuel. But we were comfortable, there was no issue."