McLaughlin will 'kick himself up the arse' after practice crash 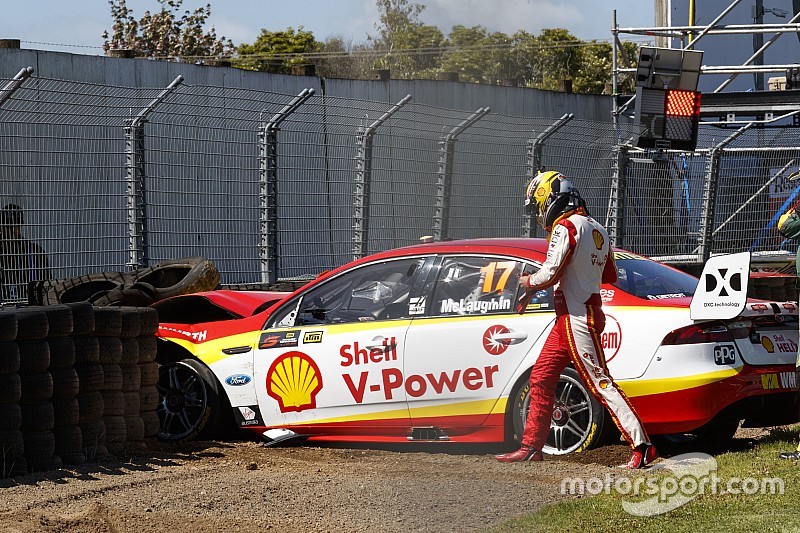 Scott McLaughlin says he'll give himself a 'good kick up the arse' after shunting during Supercars practice at Pukekohe today.

The title contender put himself on the back foot for the Pukekohe weekend by hitting the wall during the second practice session, a rear lock-up at Turn 2 sending him in the wall.

While the car has already been repaired and took part in the passenger rides this evening, it did mean he missed out on all but two laps worth of practice running in the second session.

Reflecting on the crash, McLaughlin was quick to take blame and said he'd give himself a 'kick up the arse' for giving the Penske crew necessary work.

"We'd been locking into their all run, so I was running a bit more brake bias to start the session," McLaughlin explained.

"I just lost the rear, braking into Turn 2. I lost it and it was gone, [I was a] passenger.

"I just overstepped the mark, it's completely my fault. Sorry to everyone at Shell V Power Racing. I've given them a whole heap of work they didn't need.

"I'll give myself a good kick up the arse and come back tomorrow."

Despite the damage being quickly fixed, McLaughlin admitted that from the car the front-one impact felt quite dramatic.

"I went to the medical centre and stuff, it was a pretty big hit.

"I can't do much about it now, I made a mistake, I've got to own it and get on with it. I'm pretty disappointment in myself."