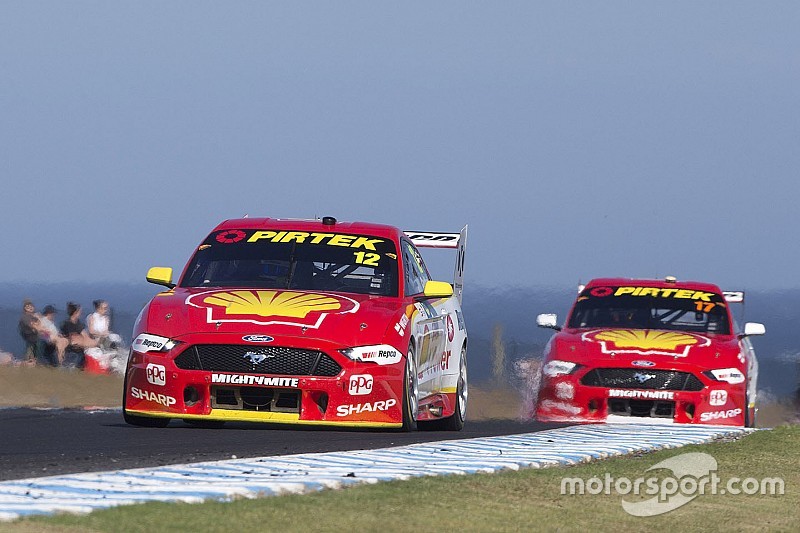 Scott McLaughlin is not ruling out an all-DJR Team Penske battle for the Supercars title, after Fabian Coulthard snapped a winless streak at Phillip Island.

Coulthard grabbed four podium finishes across the recent double-header, starting with a pair of seconds in Tasmania and a third consecutive second place at Phillip Island last Saturday.

He then broke an 11-month winless streak with a fine victory ahead of McLaughlin on Sunday at Phillip Island.

Despite dropping points to Coulthard on Sunday, McLaughlin still holds a comfortable 124-point lead in the standings – more than what's on offer for fourth place in a sprint race.

Still, Coulthard's current form is enough to have the reigning champion wary of a potential title threat from the other side of the DJRTP garage.

“Look, he’s right there," said McLaughlin of Coulthard. "He’s in the same equipment, he’s got the same opportunities I have. When the team’s doing a good job and the pit stops are great, there’s opportunity for both of us to win races.

“I think you’ve just got to look at the start going into Turn 1 [at Phillip Island], we both wanted that first place and to lead and get that track position, because that’s what it was. When he came out on track in front of me, I was like ‘ah rats’ – but anyway, that’s just how it is.

“You’ve got to get on with it, and it’s a good rivalry between the two teammates. Not only does it spur me and Fabs on and make us better, it makes the team better and want for each car to get a one-two. It’s just a cool feeling.

“I guess in the long term, absolutely, Fabs is right there for the championship.”

Coulthard, however, said he won't worry about where he sits in the points until after the long-distance races later in the season.

“We’ll just keep racing hard," he said. "I want to say evaluate the championship after the Enduro Cup, so yeah, we’ll see how we stack up after that."