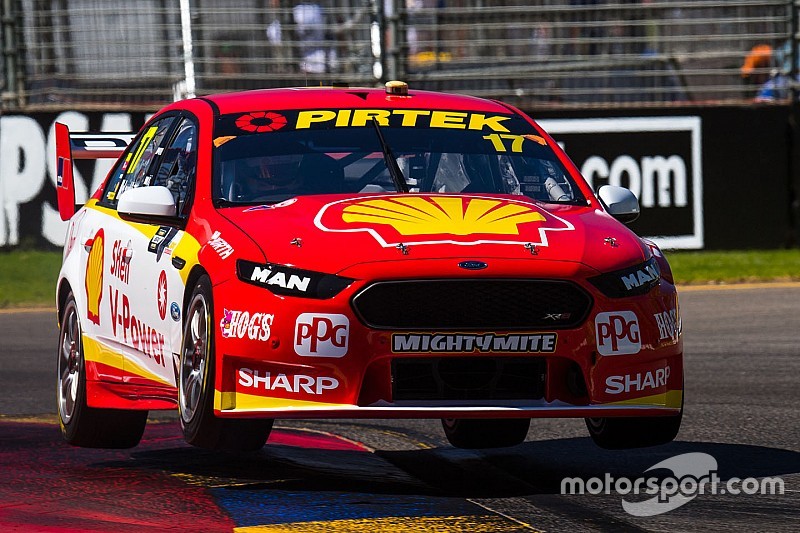 Scott McLaughlin says a communication error is to blame for the pit lane penalty he was handed for weaving behind the Safety Car in Adelaide today.

The Kiwi was among the front-runners during the early stages of today’s opening leg of the Clipsal 500, only to have his race de-railed by a pit lane penalty for illegal weaving behind the Safety Car.

Supercars regulations forbid weaving once the Safety Car lights have gone out, which is deemed to be the start of the restart procedure, a rule that McLaughlin fell foul of during a Lap 23 restart.

According to McLaughlin his mistake came thanks to a communication mishap between him and the team, with the Safety Car out of his direct sight when he attempted to warm his tyres one last time.

“Unfortunately that is a bit of communication protocol that I missed, and the team missed with me,” said McLaughlin.

“I knew straight away. I couldn’t see the Safety Car; it was in a dip. The light had gone out, I was behind Shane van Gisbergen at the time, and I was weaving still, trying to get temperatures up.

“It’s one of those things; I’m used to getting told that the lights were out. It’s no fault on anyone, it’s just something we’ve got to work on. I fully understand the rule, and the penalty. I’m just disappointed.”

But while it ruined his race, McLaughlin stopped short of saying the punishment is too severe for the actual crime following Supercars’s move to be more lenient with on-track issues.

“I don’t want to comment. It’s… that’s something for the powers that be,” he added.

“That’s the rule, and it’s been in place for a long time. We knew it, it was just a communication error.

“I wouldn’t blame the rule, it’s just unfortunate that we shouldn’t so that. It probably is a little bit harsh, but you shouldn’t be doing it. That’s the rule, we know it, and we’ve had it for a couple of years.”

The Erebus driver was on the fringe of the Top 10 when he was slapped with a penalty for hopping the chicane kerb more than four times, something he told Motorsport.com he thinks is far to harsh.

“I was in the heat of battle, it’s a hot day, I was flustered…” said Reynolds.

“The funny thing is they had a big meeting on Thursday about not giving people pit lane penalties anymore because it ruins their race for little misdemeanours, so I feel extremely hard done by.

Taz Douglas: ‘I was cooking myself’