Jamie Whincup helps teammate Craig Lowndes to victory at Homebush to allow him to hold second place in the points over Mark Winterbottom. Hot temperatures in Australia cause drivers to suffer heat exhaustion.

The penultimate race of the V8 Supercars Australia season was described as entertaining; with TeamVodafone driver Craig Lowndes piloting his #888 Holden to second place in the championship which has been the focus of the team since Jamie Whincup claimed his 4th title already.

In doing so Lowndes grabbed his 89th career victory and is one behind all time great and once former team mate and now retired Mark Skaife. In taking the chequered flag on the Homebush street circuit, Lowndes acknowledged that with Whincup allowing him to pit first instead of queuing contributed to his victory. “The focus coming into this weekend was to secure second. Frosty (Mark Winterbottom) will be peeved today after his result and no doubt will be looking at tomorrow to improve on that,” said the winner. 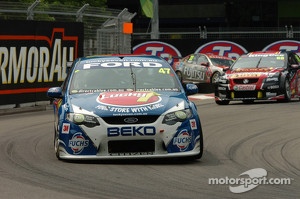 Second place finisher and pole sitter Tim Slade in the Lucky 7 Racing Ford demonstrated that he is going to be a force for years to come. Although he slipped up on lap 62 whilst leading when he ran wide and dropped back to 3rd, he lead the majority of laps and managed to take 2nd when James Courtney in the Holden Racing Team Commodore dropped back after his team advised him that he was running low on fuel.

Slade said, “It was an awesome day, we ticked a lot of boxes starting with pole. I was cooking inside (the car) and made the mistake. That’s now happened and we move forward”.

Courtney added, "It's been a long time between drinks but it's good that I've finally got a podium this year. I started to get a bit emotional there at the end when I had to back off and let the guys go, but it's still great to come home in third."

Whilst the temperatures on the track reached 40 degrees Celsius and had fans looking for cover a number of drivers suffered the heat when their cool suits failed; none more than French driver Alexander Premat in the Fujitsu Racing Holden who pitted with a dozen laps to go and had to be pulled from the car suffering heat exhaustion.

Lowndes commented, "With the heat today, I was expecting worse conditions but in that middle section just before the series of safety cars my feet must have been 105C degrees because they were burning!"