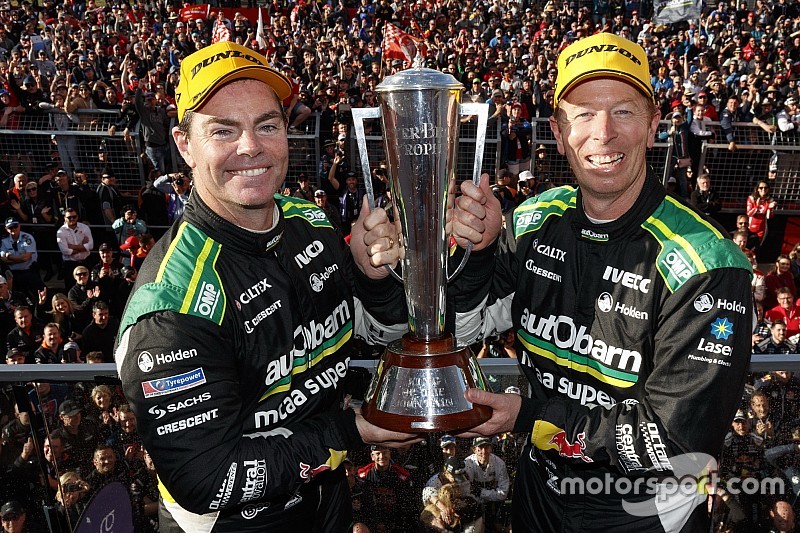 Having now secured his seventh Bathurst crown, Lowndes is well within striking distance of equalling – or even beating – his mentor's record tally.

And Lowndes will have a renewed focus on the long-distance races from next year onwards, as he scales back his full-time commitments and slots into co-driver role at Triple Eight.

Sticking with Triple Eight means he'll have a competitive seat for future Bathurst races, as pairing Lowndes with either Jamie Whincup or Shane van Gisbergen would create a formidable partnership.

"It’d be nice to try and get nine, yes," said Lowndes.

"[Triple Eight] Roland actually said I’m good enough for another five years and I’ve only got a contract for one, so hopefully I can put pen to paper and get those extra four.

"But whether I pair up with Jamie or Shane I think that next year’s combination will be strong."

That doesn't mean Lowndes is counting his chickens. The veteran knows how tough the race is to win, having gone two decades between his first and second Bathurst crowns.

With Ford renewing its manufacturer status with a new car next year, and pre-race favourites like Whincup and Dumbrell so often falling short at Bathurst, Lowndes says he'll take a measured approach into his new co-driver role.

"We'll keep working on the car, and no doubt that Ford will be strong with their new Mustang, so it’ll be an interesting race next year," he said.

"You never know because last year Scotty [McLaughlin] had a mega car here and unfortunately had a mechanical problem. [This year] car #1 had good pace and lost a wheel...

"You never know what happens around this place."

Reflecting on this year's triumph, Lowndes says it rates close to his breakthrough win in 2006, just weeks after the death of close friend Brock.

"[The 2006 win] is sort of the special one because of the emotions that went behind it, but this is definitely right up there," he said.

"It’s probably the second-best because now I know we’re not going to be a full-time driver next year and these guys can all battle it out.

"But I’ll be back here next year to have a bit of fun."