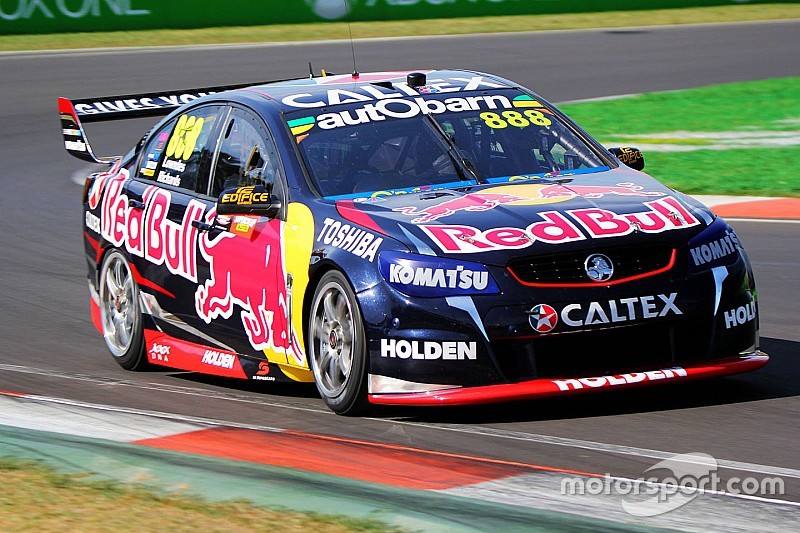 Craig Lowndes and Steven Richards won a tense Bathurst 1000, ahead of Mark Winterbottom and Steve Owen, and Garth Tander and Warren Luff.

With the race boiling down to a four-way fight between Lowndes, David Reynolds, Winterbottom, and Jamie Whincup, a Lap 138 Safety Car proved crucial to the result.

To that point, the foursome had been running nose-to-tail. But when Scott Pye – who himself had danced on the edge of the lead group all day – was fenced when something broke on his Penske Falcon at Sulman Park, the resulting caution sent everyone scrambling into the pits.

Needing the shortest of the fuel stops for the final stint, Lowndes was vaulted from third into a lead that he was able to hold until the finish.

The win capped off a remarkable comeback for Lowndes after a disappointing qualifying session on Saturday. After a solid first stint, which got him in the same area as the lead pack, Lowndes found himself running second behind Reynolds as the crews cycled back on to slick tyres after a mid-race rain storm.

Lowndes actually passed Reynolds for the lead on Lap 118, only to lose it when Reynolds short-fuelled on the second-last stop.

But when the Safety Car played its part in the last stops, Lowndes was able to leapfrog Reynolds and set up a classic win for him and Steven Richards. All he had to do was survive the final stint, which he did perfectly to claim a sixth Bathurst 1000 victory and a fourth for Richards.

The points-leading #5 car came home second after a rollercoaster of a race. After not making much of an impact in the early part of the race, an electrical problem saw the Falcon black-flagged on Lap 44.

Rather than pit and rectify the problem straight away, the team elected to diagnose it from the pit-lane before bringing the car in. It resulted in a 15-second penalty for ignoring the flag but meant a faster fix.

Then, came a blinder from pit-lane; as the track started to dry after a mid-race rain storm, PRA put Winterbottom on slicks before anyone else. It put him right back in the game, and meant he was third when the race re-started for a final time on Lap 143 after the Pye Safety Car.

Third then became second at the start of the second racing lap after the caution, the sole Pepsi Max-car in the field holding that position to the finish.

Tander barges through, Reynolds shuffled back

Reynolds and co-driver Dean Canto had been right in the fight for the win for the second half of the race, and Reynolds even sat second as the race re-started for a final time after Pye’s crash.

But being shuffled wide by Fabian Coulthard at Turn 1 on the second lap of racing after the caution cost the #55 dearly, dropping him to sixth, behind Garth Tander, Coulthard, and Scott McLaughlin, by the finish.

Tander’s third place, however, came from a series of opportunistic moves right at the end.

Having sat well behind the lead pack at the final re-start, a result of having to do an extra lap when the Safety Car came out to avoid stacking behind team-mate Jack Perkins, Tander went on a charge when the race went green for a final time.

First he put himself in a position to take advantage of Coulthard running Reynolds wide, before then forcing his way past Coulthard and McLaughlin at Turn 2 to set up an unlikely podium finish.

Mid-way through the race, it seemed it was Whincup and Dumbrell’s to lose. Whincup had been typically strong through his stints, while Dumbrell was able to match it with the big boys when a pit sequence had him fighting the regular series drivers.

Even the rain didn’t worry the #1 Commodore, Whincup going a lap extra on slicks in the rain and still retaining the lead. But when he had to stop longer to address that throttle issue, he was dropped back to four.

To that point, he was still in the game, but the final round of stops was the nail in the coffin for #1. Knowing he would have to stack behind Lowndes, Whincup decided to stay out for an extra lap – during which he passed the Safety Car, which earned him a penalty.

That took him from P2 to P18, and left team boss Roland Dane a little confused as to what he described as Whincup’s decision to stay out. “He did, we didn’t,” said Dane when asked why Whincup refused to pit. “He was meant to come in…”

In terms of hard-luck stories, the first went the way of the second Volvo. With regular driver David Wall behind the wheel the #34 entry lunched its engine Lap 16, resulting in the race’s first DNF.

Wall’s problems were bad news for the all-female entry of Renee Gracie and Simona De Silvestro as well; just seconds after the engine let go, Gracie found herself stuck in the wall at Forest’s Elbow, having slipped on the Volvo’s oil.

After a 40-lap stint in the pits, the #200 Falcon managed to get back on track, and ultimately finished 23rd.

Other retirements included the #111 car of Andre Heimgartner and Ant Pedersen, which hit the wall hard on the exit of Turn 1 on Lap 36 after rear contact from Karl Reindler, before Reindler’s own car joined the DNF list after Tim Blanchard binned it at Sulman Park