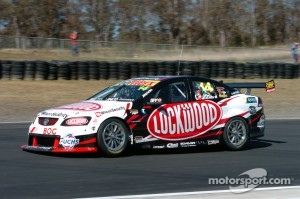 Mechanics are working hard this afternoon to fix the Lockwood Racing Commodore after a 200kph+ smash at Sandown Motor Raceway's Turn Six.

Endurance co-driver David Besnard is unsure what caused the impact, which happened in today's second V8 Supercar practice session, but says a recent rain shower could have contributed.

Regular driver Fabian Coulthard had been running comfortably in the top ten during this morning's first practice session and says he is confident the crew will deliver him a fast car for tomorrow's fourth practice session at 9.40am.

Brad Jones Team Co-Owner "The right-hand rail has a lot of damage and pulled the castor bar out of the cross member. There's also a lot of cosmetic damage and the diff's bent. We've had them damaged worse and repaired them though, so the guys are all getting stuck into it now and it's already been stripped. We'll have it going for tomorrow for sure."

David Besnard Lockwood Racing Co-Driver "It was a pretty big hit. The tyre walls are good for safety but they rip the car up a little bit. I went under it like a conveyor belt.

"We'd had that bit of rain not long before but I'd done a sighting lap and the track seemed fine. I turned the steering wheel and the car just went straight so one of three things happened: either I stuffed up, something went wrong with the car or perhaps there was a bit of water on the track that wasn't there the lap before. I honestly don't know what the answer is. I'm waiting to see the in-car footage."

Fabian Coulthard Lockwood Racing "It's a bit of a minor set back! We rolled the car out of the truck this morning and it was fast so I have no qualms there or with set-up. It would have been nice to try a few more things in Practice Three though. That is the most disappointing thing.

"I'm normally the one that creates situations like these so I know what it feels like but it's better to get it out of the way on Friday. Car's can be fixed and people can't."

Ford versus Holden documentary in the works