Jacques Villeneuve has been in enough race cars in his storied career to know the seat time in the key to success.

So after a dismal showing at his first regular-season V8 Supercars race two weeks ago at Townsville, Villeneuve will get back on the horse and compete for the Kelly Racing team in the next two rounds. 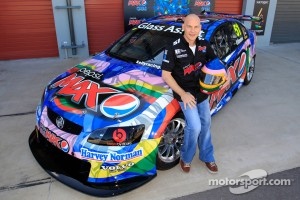 Villeneuve, who took over the reins of the #51 Pepsi Max Holden Commodore as a replacement for the injured Greg Murphy, did not finish the opening race at Townsville after mechanical problems felled his charge. He had started 28th and run as high as 12th before bowing out after 19 laps. He fared not much better on Sunday, finishing 24th.

The former F1 and Indy Car champion will run at Ipswich and Sydney as he continues his stint with Kelly Racing.

“Jacques is an absolute professional and will add a lot of value to the team, especially as he secures further seat time over the next couple of rounds,” says Kelly Racing Director and driver Todd Kelly. “Jumping in the car at Townsville without testing or for that matter even sitting in the car is a daunting task, but he took it all in his stride and was pleased with his efforts and have absolutely no doubt he will quickly move through the field in future events.”