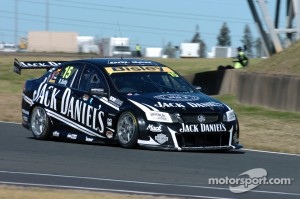 The first of three practice 40-minute practice sessions for the V8 Supercars got underway under cloudy skies at Sandown this morning.

Rick and Todd Kelly in the Jack Daniel's Racing cars continued to build on the their successful recent test at Winton.

Running on old tyres, Rick and Todd worked away on tweaking their cars to find a good balance around the high-speed 3.1 km circuit.

At the end of the session Rick was 15th quickest and Todd 22nd.

This 40-minute session was for the co-drivers and Jack Daniel's Racing Tim Blanchard in Todd’s car and Queenslander David Russell in Rick’s #15 car spent the session getting comfortable with the cars and the track. Midway though the session a light sprinkle of rain covered the circuit.

This session was cut short in a dramatic fashion when David Besnard crashed at turn 6 bringing out the red flags. Although David was okay the car was extensively damaged. The session restarted with just three minutes left with Tim finishing 22nd and David 23rd.

The third and final session for the V8 Supercars today saw both Tim Blanchard and David Russell start the session in the Jack Daniel's Racing cars. The field had barely left the pitlane when the red flag came out due to a stopped car on the circuit. When the session resumed Tim remained in the #7 Jack Daniel's Racing car, while Rick jumped back into the #15. Light rain fell through most of the session with the track temperature registering a cold 16 degrees. Towards the end of the session the rain shower passed and bright sunshine bathed the circuit for the first time today.

With less than 10 minutes remaining David Russell jumped back into the #15 car for a couple of quick laps before handing the car back to Rick. Meanwhile Todd completed 23 laps and used the session to ascertain the balance of the car over a longer distance. At the end of the session the 27 cars were separated by 1.9 seconds with the #7 car 21st and the #15 car 24th.

Todd Kelly – “The car was really good on the old tyres, even when the track was damp. So if it rains I think we’ll be alright, but we still have a little bit of tuning for the dry and we haven’t had a full set of green tyres on it yet, so I think we’ll be okay”.

Tim Blanchard – “I’m feeling pretty comfortable in the car and we’ve got a few things we can work on overnight. So I’m still pretty confident we can get a good result this weekend.”

Rick Kelly – “Today was a tough little day due to red flags and weather changes, but I’m pretty happy with the progression we’ve made. We haven’t gone out there on a good set of tyres yet, but we’ve been working at making the car nice and compliant for the race run and giving Dave some laps as well. We ticked a lot of boxes today”.

David Russell – “The weather cost us a lot of time today, but it was the same for everyone. In my first run in the car I didn’t feel all that comfortable and struggled a little bit. But in that last session I just jumped in and banged out times pretty close to Rick’s, which is where I wanted to be. So it was a nice way to wrap up the day”