IRWIN Racing’s Lee Holdsworth might not have been in the media conference after today’s opening practice sessions for this weekend’s Sydney Telstra 500 at Homebush, but don’t discount him for when it counts!

Holdsworth struggled with his IRWIN Falcon straight out of the box, but had punched his way back to 14th by the end of the final practice session.

When he came in for his final adjustments he sat 19th on the time sheets and raced to 11th on a fresh set of tyres in the dying couple of minutes – one of six race sets the team will use over the next couple of days. 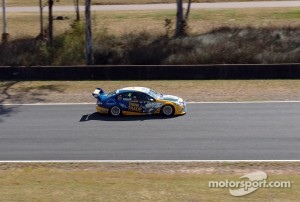 He was bumped back a further three spots as opposition took the chequered flag.

The earlier practice session was extremely frustrating for Holdsworth who was deemed 26th fastest, after his five fastest laps were taken away because of a breach of the kerb-hopping sensors at the turns 2/3 and 6/7 chicanes.

There will be a 20-minute qualifying session in the morning, a top-10 shootout and then a 74-lap race in the afternoon.

What Lee Holdsworth had to say……

“We started with a car well out of the window in the first session and we worked at it and got closer and closer, but we did not have enough time in the end,” said Holdsworth.

“We were much happier with the car at the end of the day than at the start, but we are still searching for a bit of front-end grip and once we find that we will be right.

“The mirrors are our “feelers” out there. When you see the mirror fold in you know you have taken all the track and pushed as hard as you could through the corner.

“That’s what these street circuits are like – it is millimeter perfect around here.

“It is fairly annoying, I don’t think they need them (the sensors).

“It is ridiculous to be honest, we have been through this so many times at this track and other street circuits.

“You can only take so much kerb whether there is a sensor there or not. Then you damage your car or it stuffs your lap anyway.

“I don’t see the point in them and it ruins the racing.

“We have a straight car and we will work on a better set-up for tomorrow and push on. We are not in bad shape.”