Insights with Rick Kelly: My ride on a MotoGP bike 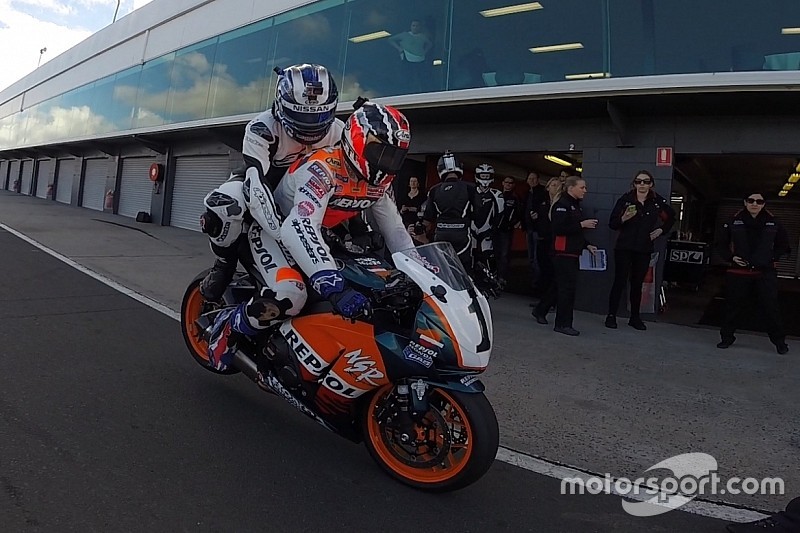 V8 Supercars star Rick Kelly is no stranger to speed and danger. But a ride around Phillip Island with MotoGP legend Mick Doohan really opened his eyes.

It’s the off week between Bathurst and the Gold Coast, and that means one thing – MotoGP at Phillip Island and the Australian Grand Prix.

I’m a lifelong bike nut. Both my brother Todd and I grew up on three and two wheelers back home in Mildura, and it’s a passion I still have to this day.

Definitely one of the coolest things I’ve ever experienced was this time last year when I had the privilege to hop on the back of a Honda race bike ridden by Mick Doohan around the Island.

Like a generation of Australians, I grew up watching Mick win five World Championships, and even today he is still one of our great sporting personalities. He is a hero, so the experience truly was a big deal to me.

The ride came about with thanks to my friends at Honda. I wish I could pay them back with a V8 Supercar ride that would be that exciting, but I think I would struggle!

The ride itself was like nothing else I have ever experienced. I’ve had passenger rides previously in a V8 Supercar, jet boats and jet planes, but in all of those outings you are strapped in well and truly to whatever piece of machinery it is, whereas on the motorbike it’s just you holding on for dear life.

The horsepower it has out of corners and up the straights is trying hard to throw you off the back, but the braking force of those bikes is even more impressive.

I had to really hold on to stop from flying up over the top of Mick. When he threw it into the corners, not falling off was a real challenge, you have to use every bit of your strength to stay on the back of that bike.

On one hand it’s extraordinary that they let people do that… during a V8 Supercar ride day, a passenger just can’t fall out of the car! You’re well and truly strapped in, but with a racing bike, I’m very surprised people don’t get flung off it as it feels touch and go if you are going to be able to hold onto your grip or not.

From that point of view it was a pretty scary experience, but one that I just loved. That goes down as one of the best things that I’ve had the chance to do.

The speeds were very comparable to a V8 Supercar around Phillip Island. I think up the straights they are a fair bit faster that what we are, but I think in a few corners, by having an extra set of tyres helps the V8 Supercar get around a touch quicker.

Overall because of the flowing nature of the track, the bikes are a little bit quicker than us in race trim.

It’s very interesting from my perspective to see how the motorcycle lines are different, and they achieve their lap-time.

They are very different, but obviously effective. I have a lot of respect for those guys and what they do. We have a full chassis, roll cage and a lot of safety features, whereas these guys have nothing, and are absolutely on the edge everywhere.

You can see how they manoeuvre the bike and how they are right on the edge of the grip, it’s a bit harder to see that happen in a car as opposed to a bike.

To experience it for real after all these years of watching it was a real thrill.

Reynolds future to be confirmed within a fortnight